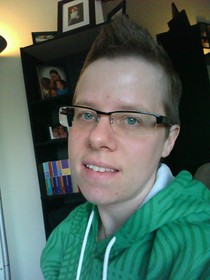 I was one of the lucky girls that got my period before I was even done with grade school and, right off the bat, my experience with it was awful. Unfortunately, I did not have a great support system to lean on. When approaching my Mom about the horrendous cramping and over abundant bleeding (to me it was a very “Carrie-esque” type of experience) she told me that it is what every girl goes thru and that I would learn to adapt. So month after month and year after year, I just convinced myself that this was normal. The phrase “This, too, shall pass” became my mantra to get thru the nightmare that called itself PMS. I had even considered having those words tattooed on me, literally.

It seemed to be as I got older instead of adapting, it got worse. So then began the emotional terror of it all. I often wondered what was so wrong with me that I struggled to deal with this while all the girls around me seemed to be fine. I began wearing tampons that very summer of my first period. While most wouldn’t recommend a 10 yr old to wear tampons, my parents felt it would be best for me because I was the poster child of Tom boy. I played in every sport, every day of the year. I tried wearing just a pad and, with no guidance on hygiene or a Period 101 course, I learned everything by trial and error. So I figured out the tampon thing after many ouchies and oopsies.

Into my teen years I learned to plan my life around the 1st 2 days of my period, as those were those unbearable days. My period came like clockwork and would last exactly 8 days. So I always knew when those 2 days were going to be. This isn’t to say that it didn’t conflict with nearly everything important in a teen’s life, but it couldn’t be any other way. Birth control, according to my never present parents, was not an option. After approaching the subject numerous times, it was explained to me that I was using my “bad” periods as a cop out to get on birth control to get a free pass for sex. It wouldn’t become clear to them until much later that birth control for sex for me was about as useful and purposeful as a candle in a rainstorm being that I am a lesbian. But I digress.

I managed to make it thru the teen years using my 2-day hall pass from life and my mantra. I joined the US Air Force right out of high school and was almost immediately diagnosed with both Crohn’s disease and Chronic kidney stones due to a low functioning kidney. This, for the next few years, would be what we pointed the finger at for any and every source of pain I endured. And I don’t just mean pains from period cramps, but I began experiencing pains throughout the entire month. They seemed to be sporadic with no real cause. They’d get so bad that I’d spike a fever, and I’d even occasionally faint.

It wasn’t until I was 25 and was doubled over with pains in my right pelvic area so bad I finally called my doctor requesting to see him immediately. I was in his office later that afternoon with a blood pressure thru the roof, high fever, vomiting, and pains so bad I couldn’t even stand straight. He sent me straight to the ER with a prognosis of appendicitis. After going thru all the standard testing for the appendix I was told that, although my appendix was ok, my gall bladder was completely inactive and full of stones. So a couple hours later I was going in for surgery. After coming out of recovery from that surgery I was told that I’d also been diagnosed with endometriosis and a specialist would be in to see me. I had never even heard of it and to be honest the term bounced off my head and into the trash can I was throwing up in. Still recovering from the gall bladder removal, a lady doc came in and tells me I am scheduled for emergency hysterectomy the NEXT day due to the extent of endometriosis found. My reaction was as honest and pure as it could have ever been in that moment. As I hit my nurse call button I looked up at the doctor and in my best Trump voice I said “You’re Fired.” A nurse came in and I said, “I don’t know who she is but I don’t want her in my room and I don’t want to be treated by her. Ever.” The Nurse assured me I would not have to see that doctor and another specialist would be in to see me as soon as possible. Later that evening a guy that looked like he could be Kramer’s (from Seinfeld) twin brother came into the room, sat down next to me and promised me there are options. That was my first real introduction to the disease Endometriosis. I had my first Laparascopy and first round of Lupron.

5 1/2 years and 1 new doctor later, I now have had 4 Laparoscopies, 1 Robotic Laparoscopy, 3 rounds of Lupron and am due for 2nd Robotic Lap and 4th round of Lupron Sept 1st. My dream and goal to be able to get pregnant is still within reach. It has been a struggle and a battle, but I am a fighter. And I know I will win. I know that the day will come where I will be pain free and I will be a Mom. All of this will be worth it. “This, too”, WILL have passed. My hope and faith rest under unbreakable ground.