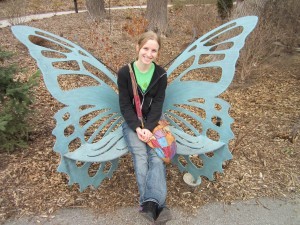 The beginning of my story is going to sound very familiar to anyone who has experience with endometriosis. It started with really bad cramps, and I mean bad, curling up in a ball, dry-heaving, and crying in class bad which, as a teen, was humiliating, bad. But I was told some girls have it worse than others, you know? I was just one of the unlucky ones. I just had to deal with it and move on.
It started to get worse in college: my right side started throbbing dangerously directly before my monthly cycle. The first couple of times it happened, I was very close to rushing to the ER for fear my appendix was bursting. I never did because I didn’t have a fever, which would have been a symptom if my organs were in fact exploding. Instead, I went to a gyno, who said the pain might be a burst cyst but was probably constipation. Either way, she said it wasn’t a big deal and I was left feeling really dumb. After that whenever the pain returned I just curled up in a ball and waited it out.

My senior year, I bust a disc in my back and was dealing with sciatica. Suddenly, everything hurt, really badly, all the time, and there was never any relief. On top of that, I started having serious problems with UTI’s. I had always been kind of susceptible to these infections before, but it seemed like I was getting really bad ones every month. Once, I was horrified I had wet myself in public, but when I rushed to the bathroom, it was blood. At first the ER staff thought I was just overreacting to my monthly. I actually had a serious kidney infection. This was the first of a pattern.

A couple months later, again in the ER (this time with a bladder infection), I was told I had a large cyst on my right ovary. At the time the cyst was not really high on my list of priorities. All I wanted was my spine surgery, which was scheduled two months after graduation (It was a total success). However, during the months of waiting and recovering, we watched the cyst through ultrasound. It just kept growing. Finally, my ob/gyn told me it was either a chocolate cyst or a tumor and I should consider surgery.

We scheduled the surgery for October 1st, 2013. When I woke up, I had already been diagnosed with endometriosis. The cyst was the least of my concerns – the whole area was covered in lesions and blisters, some so deep that he couldn’t remove them without causing serious internal damage. One ovary was growing to the small intestine and the other was trying to become one with my pelvic bone. He cut apart what he could, even slicing a hole in my uterus to release blood and cauterized everything.

I was told if I had waited any longer for the surgery having children would have been impossible. As it is, I do have a chance. I’m on Lupron Depro shots now which gives me all the joys of menopause at age 24. I’m not sure how effective they are, because I still have a lot of pain, cramping, and sometimes I bleed for weeks.

I don’t know what the future brings, and honestly, it scares me. I don’t know if the treatment is working or not. I don’t know if I’ll be able to have children or not, which was a horribly difficult conversation to bring up to my then boyfriend (his response was that he loved me, not my uterus. We’re now engaged to marry this August, and I feel very blessed to have him).
But as scared as I am, I’m also angry. I’m mad that I never heard of endometriosis before being diagnosed with it. I’m mad it was never mentioned in any of the puberty books I read as a girl, and that it was never discussed in my sex-ed or health courses. I wish I had been told that there is such a thing as cramps being too painful, even unhealthy painful. I wish I had known while everyone gets UTI’s, frequent infections could be a sign of endometriosis. Maybe then, I could have asked my gyno about it earlier. Maybe then, I could have been on some form of treatment earlier versus later.
So why isn’t this condition more open to discourse? Is it because endometriosis is a women’s disease? Is it because the symptoms are embarrassing to talk about? Is it because there is no real way to diagnose it or to cure it? Because I think these are more reasons to talk about it. And maybe people were talking but I know I missed the conversation. I didn’t even know there was a conversation until I was diagnosed. I’m willing to bet I’m not the only one.

I guess I just wish I had known it was a possibility. But now, not only is it a possibility, it’s my life. The war had been going on for years, and I’m just now gearing up for battle. I really hope I win.