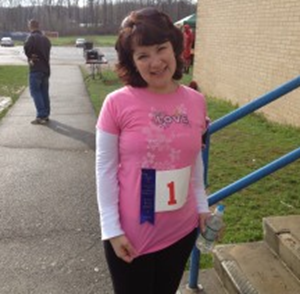 My name is Natalie, I’m 42, and I’ve had severe endometriosis since I was 16 years old (it runs in my family). I went through five years of many doctors (who couldn’t believe someone so young could have it so bad), missed high school and college, had horrible pain, GI symptom,  massive bleeding, bladder issues, and more.

In 1992, at the age of 21, I had my first laparoscopy. The surgeon apologized to me for “all of the doctors who were so wrong.” I was the worst case of endometriosis she had ever seen. I was on years of Lupron, birth control, and Depo followed until I was married.

My husband and I married early in grad school and we tried to conceive for three years. With my endometriosis getting worst after each fertility drug, one IVF attempt, three laparoscopies (losing one ovary along the way) later, the endometriosis and adhesions became more problematic and fierce. I was told that I could never conceive or carry to full term.

On September 15, 1999 (14 years ago), I made the difficult decision to have a total abdominal hysterectomy. It was a quality of life decision. The performing surgeon told me that if we had waited six more months he would have had to completely resection my bowel. He was the second surgeon to say I was the worst case he had ever seen. My hysterectomy took four hours. I am one of the few rare women who can say that my new life started the day after my hysterectomy. I would never recommend that anyone consider a hysterectomy until all options have been exhausted. It should always be a last resort, but for me it was a new beginning.

Fast forward to 15 years of less pain (I still have adhesion pain, some GI issues, and gnarly migraines), and a slow recovery, but my body started improving. Surgical menopause was (and still is) a drag, but it’s better than active endometriosis and adhesions (hormone replacement was never an option). My husband and I adopted our son 11 years ago and I couldn’t imagine having any other kid, as well as having my relative health to raise him, I have the energy I never had in my late teens/early through mid twenties.

On September 15, 2013, I ran my second 5 K race. Last November, I started running with my son to help him train for his black belt in karate. I never stopped. For the first time in my life, my body became a source of pride and happiness, not grief and pain. I’m not very fast, I can’t run much more than three miles and I don’t know how long I can do it, but I will run as long as my body lets me. I genuinely believe my ability to run now is a gift from God,  just like our son, and my many other blessings. During my races and runs, I often think about the staggering pain I used to endure on a daily basis and pray for all you women who still live with active pain everyday.

I apologize for the length of my story, but I wanted to share my perspective as someone who lived in constant pain for most of my young life. I still have some pain and some challenges, but I was blessed to be given a second chance at health. I’ve peaked in my early 40’s! If you have endometriosis and you are in pain, please don’t ever give up! Find a doctor or a surgeon who will support you, listen to you, and who will put your needs first. Follow your heart. Get a good support system (I wish I had group like this 20 years ago). You may feel that endo is knocking you down, but know that you are a brave fighter!!! Always keep the faith! I am proof that there are second chances in life!