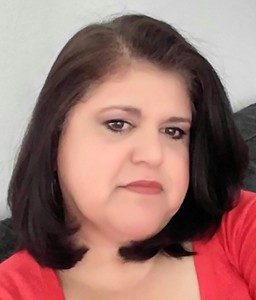 I was 48-years-old at the time and a widow who thought she was going to begin her new life with her fiance. But in March 2013, I began a nightmare that I never, ever want to experience in my life ever again. The feelings of what my late husband felt when he was dealing with his illness all came back and just took over my body and soul. I didn’t know what was wrong with me. I really thought that I was going through menopause, or at least I wanted to believe that. The symptoms were similar, and all I kept thinking and praying was that it was menopause.

The bleeding wouldn’t stop, from February 4th to March 20th. Feeling so tired with constant headaches, heartburn, my stomach growing every day and just feeling sick to my stomach made me realize that something was not right. I spoke to my doctor and explained to him what was happening, and he told me to come in to do some blood work. I didn’t even imagine what was about to change my world again.

The next day, I received a call from him, and he told me over the phone that I’d had a miscarriage. My heart was in a million pieces. All I could do was cry. I didn’t want any more children. All my children were grown, and I am a grandmother of three. This couldn’t be happening, I told him. I didn’t even want to hear any more from him. But he has been through so much with me, and he knew my life story. I knew he felt bad telling me this. He said that I needed to come in and meet with the gynecologist.

The next day, I met with him, and he examined me. A urine test and ultrasound were done to see if I was truly pregnant. He came back to see me and said that I was not pregnant, but that I had a molar pregnancy. I looked at him and said, “What????? What the heck is that?” I had never even heard of this. He explained to me that I needed to have another ultrasound done and that he would schedule it with the technician. He took me off of work for approximately two weeks.

During this time, I had been dropping blood clots the size of oranges, left and right. Tampons would not stay in, and my pads were soaked through. I was constantly changing my clothes and taking showers all day long. It felt better to just lie on the couch and not move. I spent that week on the couch driving myself crazy, just staying home and not being able to get out and do things. Since my late husband’s death, I had become so independent and so used to getting up and going whenever I wanted to. Now I was confined to this couch that my late husband used to sit on when he was ill, and all it did was make me cry. All I could think about was my late husband and what he went through, not to mention that it was almost the anniversary of his passing, March 4th. It was so heartbreaking for me. I said to myself, “Now I know exactly how Ruben felt.” Tears would not stop.

I finally decided to ask my fiance if I could go over and sleep at his house because I couldn’t sleep at my house, and I was so exhausted. On March 10th, I went to his house with my overnight bag in hand. When I got to his place, he had dinner waiting for me. I could barely eat or put anything in my tummy. I always felt full. I took probably about four bites, and I was full. I finally went to bed around 8:30 pm and fell asleep. I woke up around 10:00 pm because I could feel something in my stomach. Sure enough, once my feet hit the floor, a blood clot came out of me, as well as a gushing well of blood. I ran to the restroom, jumped in the shower and rinsed off. I changed my clothes and went to lie on the couch because I didn’t want to wake up or disturb my fiance. I fell back asleep and then woke up at 1:04 am, and again, a blood clot the size of a grapefruit came and dropped to the floor. Here I go again to the restroom to take another shower and change again.

By this time, I was feeling so nauseous and weak, I could barely make it back to the couch. But I managed to. You would have thought that I would be waking up my fiance to take me to the hospital, but no, stubborn as I am, I didn’t until about 4:15 am. Another blood clot, this time the size of a melon, came out, and I just sat on the toilet, barely lifting my head because I was so weak at this point. Now I wake up my fiance and tell him that he needs to take me to the emergency room.

We drove to the hospital, and more of my feelings from the past surfaced. On March 10, 2009, I buried my late husband, and I was on my way to the very same hospital that the ambulance brought him to. So my emotions were all over the place. I was admitted to the hospital and was told that I needed to have a blood transfusion. My mind was so clogged up, I couldn’t think straight or even talk right. My family was there with me–my daughters, my parents and sisters. Holding my hand the whole time was my fiance. He stood by me through all this and didn’t leave my side. He was truly my hero! While I was lying on the bed, I felt something happening, and that’s when a bag of what looked like grapes came out of me, and all I could hear was, “Yup, she has a molar pregnancy alright.” I was then told that I had to be released because I needed to go and see an oncologist who would perform the DNC and possible hysterectomy.

I was released on Monday, the very next day, and had an appointment with the oncologist the next day, Tuesday. When I went to see the oncologist, he explained everything to me and gave me a better understanding of what was happening. I was admitted again to the hospital and was told that I needed to have the DNC, but the hysterectomy may not happen because my uterus was enlarged. It was 19 x 8 x 2. “WOW,” I said. That was way too big. Shouldn’t it be the size of your fist? I did not have the DNC until Thursday at 1:00 in the morning. All my family was there to support me, and my fiance was still there by my side. When I woke up, I wanted to know if they had done the hysterectomy, and I was told, no, they were not able to do it. But I would be scheduled for one in the future, once the the uterus went back down to size.

I was released from the hospital the next day. I was still bleeding, and at this point, I was so tired of bleeding. I asked the doctor if I would still keep on bleeding, and he said that I would and that I may have more bleeding, but that if I begin to hemorrhage to call him as soon as possible. I stopped bleeding on March 20th. I was relieved, but not fully convinced that I was through with worrying. I was told that my HCG levels were really high and that I needed to do blood work on a weekly basis. I was still terrified because the fact remained that cancer could still show up.

Four months later, I was scheduled to do my hysterectomy at the end of the month. I had not had any major bleeding since then, and my HCG levels were slowly going down, thank GOD. But I had been having major cramping during this time. I had the full hysterectomy at the end of July and was relieved, but then received the news that I had feared all along. They had found a pre-cancerous cell hiding behind the uterus. I still had to be monitored for a year.

Through all this, I remained positive but fearful of having the cancer spread. I am excited for a whole new life ahead of me because I married my first love. You see, my fiance was my first boyfriend when I was 13-years-old. He was the neighborhood boy down the street where I grew up. But life happened and drove us to different paths. After my late husband passed away, my fiance was sent down my road again. FULL CIRCLE! We married in September 2013, and I am looking forward to this new beautiful life. I have been through a lot, but I know in my heart that I can get through this and that I will come out stronger than ever. I understand how important this molar pregnancy is, but with faith in my right hand and courage in my left, I know that I will get through it as a WARRIOR!!!