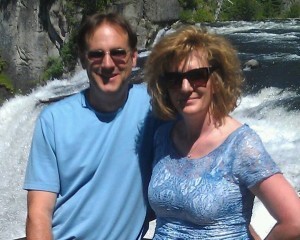 I am 42 years old and I have had my struggles through life just as everyone else has. After going through the struggles of being empty-nesters, my husband Darren and I were coming into the next phase of life and really enjoying ourselves. We had placed ourselves in a comfortable position in life with two successful businesses that we had worked very hard to obtain. We were starting to live a healthier life with many travels in our future.

My grandmother and all her sisters had breast cancer, so of course I was worried that I too would be diagnosed at some point in my life. I lost my mother at an early age and every time I would mention my fear to the doctors they would brush it off saying I had no direct family member that had cancer, so I need not worry. I insisted they do a mammogram when I was 35 as I had found a lump. It turned out to be nothing more than a cyst that took care of itself and vanished.

Seven years later I was discussing how my day went with my husband as we were getting ready for bed. I fell into a trance as Darren was talking to me, he asked what was wrong. I told him if I was ever to get cancer, it would be in my left breast. Darren looked at me oddly and asked why I would say something like that. I told him I could feel it. It was going to happen, not now but one day. Four months had passed since Darren and I had our discussion about my feelings. It was a normal day, just like any other day when the alarm went off, and it was time to get busy, I had a strong urge and kind of pain come over me again. I rolled onto my back and did a self breast examination. There it was, a little hard bump in my left breast! Darren urged me to call the doctor, which I had tried, and there was no answer. Darren kept on me until I called and got through. They saw me that day. Same as before the doctor wasn’t really too concerned with the findings and said it was probably nothing. Feeling a little better I set up an appointment for a screening and went on with my day.

I really hadn’t given the lump another thought as I went through the normal procedure of what you do. As I was sitting waiting to be called in for my mammogram, one of my friends walk around the corner, she was working with me that day, she asked me why I was having a screening, I looked at her, probably in the same way Darren had looked at me four months prior and I said, “I have a lump,” she said, “I know, that means you need a diagnostic done, you have a lump, let’s find out what it is.” With that she walked away and had my orders changed.

I went through my appointment as usual, except this lump did not appear, it was right on a ridge of tissue. We then proceeded to an ultrasound. There it was, it was so black it stood out on the screen, I had no schooling in this area but I saw it. With these findings the next step was to have it biopsied. The next day I received the call, “It’s malignant!” After spending the next few days crying and having the verse of Tim McGraw’s song ringing in my head, it was time to decide to fight!!! Fight like there is no other option, well there is no other option.

My husband Darren insisted that I take the time off work and focus on just getting better. I fought him at first because I was determined to have life as normal as usual. Well I have found that isn’t an option either because my husband stepped up and researched what was good for me and what was not. I am now able to concentrate on getting better and winning this fight I am fighting. Darren has taken over all the cooking and shopping as well as keeping the house and working full time to keep things going. The outreach of my family and friends is amazing and I am glad that Darren took the everyday stresses out of my life.
I am one third of the way through my battle. I have had a bilateral mastectomy, as the cancer had gotten into the surrounding tissue and into my sentinel node. I have started the reconstruction process. Darren is feeding me green smoothies with glutamine, along with other supplements which have helped make me stronger. In fact, when I went back to the plastic surgeon, he had told me in two weeks I was as far as most people are in two months. Along with the amazing diet Darren has me on, him trying to keep things stress free. My daughter walks with me almost daily to keep my strength up as I get ready for the next step. Constant love sent from my sons, my friends, and family rally around us, bringing us meals, lawn mowing, groceries and prayers, along with anything else we could ask.

I have learned to open my heart not only to give love, but to except love and what people will do for you. I will have a blessing on Sunday, a “HAT PARTY” thrown for me on Monday by loving friends, and start my battle with chemo on Tuesday. I will come out of this a better person than I was going in to this…… I will keep you informed as I beat this beast!!!