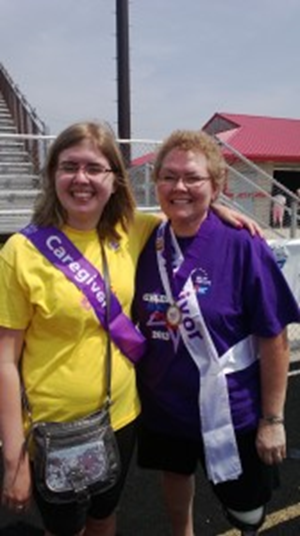 In 2002 I tried rollerblading. After a week and a half my leg was very sore. I tried everything but the boot kept hitting my leg. I was left with a very ugly bruise that took months to completely heal so I gave up rollerblading.

Over the course of a year I started having some pain in that area. Just ignored it until I noticed a lump forming. I went to the doctor and he thought it might be a stress fracture. He took an X-ray but saw nothing. A few more months went by and the lump kept growing and waking me up at night from a lot of pain. I made an appointment to see an orthopedic doctor and he suggested an MRI. A few days later when I had my MRI the tech was taking the pictures and said to her co-worker, “Okay that’s it.” and he said, “No Way. The doctor is going to want this view too.”

When I went back to the orthopedic doctor I knew something was wrong. The doctor told me he had made an appointment for me in three days in Indianapolis with a specialist. He URGED me to NOT miss it and to take this seriously (Dr. J,  thank you for saving my life)! I kept the appointment and was introduced to Dr. R who was a tumor specialist. After a biopsy it was determined my tumor had Ewing Sarcoma markers and would need to be removed, along with part of my left tibia.

Bone was taken from my hip and a rod and two screws were inserted into my leg. After almost three months of healing and waiting for bone growth to begin and more test done on the tumor I was referred to the Children’s Hospital in Indianapolis. Even though I was 33 at the time Ewing Sarcoma is primarily a teen/young adult cancer. It was there I began my 16 rounds of chemo alternating for five days and three days every three weeks. These were all in hospital and Indianapolis was two hours away from home. Thankfully with the help of friends, family, my wonderful husband, and amazing kids we made it through and I remained cancer free for almost five years.

It was right before my five year appointment I started feeling something strange in my leg. It was kind of like water flowing back and forth as I moved my leg around. Concerned I called Dr. R and they scheduled an MRI. To my dismay my Ewing Sarcoma was back. Another years worth of chemo but no blood transfusions! I was happy to find a doctor who would treat me locally per the Children’s Hospital doctor’s orders. I had another surgery to remove the tumor. That was in 2008 and I remained cancer free until 2012 when I started experiencing some pain in my leg again. Upon examining my leg I found another lump. I called Dr. R and he ordered another MRI and yep another tumor. This time I knew what option was left and made the decision to remove my leg at the knee mid chemo. I always told myself from the beginning that I was blessed and even though I lost my leg I feel so blessed I had this choice. I feel equally blessed to be surrounded by a group of AMAZING doctors who have helped save my life and helped me be a three time survivor against Ewing Sarcoma. I have been told I have dodged a bullet three times! I am so thankful to everyone along the way who has helped me get to where I am today! I will never give up and I will ALWAYS FIGHT LIKE A GIRL!