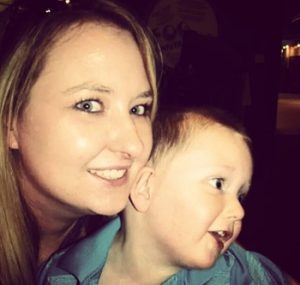 At the age of 24, I never saw my life being like this. I would say my troubles truly started when I got pregnant in 2010. Only 4 weeks in, they thought my son was ectopic. So I had a laparoscopy which showed he wasn’t. Thank God for that miracle! I had a rough pregnancy and long, difficult labor. After 22 hours, they finally decided to do a c-section because my son was stuck in my hip, distressed. I contracted E. coli in my blood because the procedure was “sterile at best.”

Ever since delivery, I have had a pain in my lower left abdomen causing pain in my hip. My periods never stopped. If I was lucky, I had a few days without bleeding. I was given Depo as needed for breakthrough bleeding, but it would still come every 4 weeks. Cramps felt more like contractions, and I would spend all day in the bathroom with diarrhea.

Fast forward to February 2014, when things really turned for the worse. I became very ill, throwing up constantly with extremely painful diarrhea. After many tests and ER trips, nothing was found. Then it got to the point where I could not produce my bowel movements. I was to the point where I physically struggled to walk because my hip was so messed up I could not lift it, and putting weight down on it was painful. The pain made me dizzy. I had many episodes of passing out, either from the pain or vomiting, I still do not know. I saw many doctors. None had a clue what was going on and assumed it was all in my head.

Finally, I saw a general surgeon who suggested my obgyn go in to look for endometriosis. Well, to my shock, she refused!  She told me she knew for a fact that nothing was wrong with my female parts and that none of my symptoms matched up. Wow. Well I finally got my second obgyn opinion from the doctor that delivered my son. At that first appointment, he said he thought I had endometriosis and scheduled surgery for first thing Monday morning. I do not have my full results yet, other than that he did find adhesions and endometriosis. I’ll find out more in about 2 weeks. Surgery went well. I’m now 3 days in. I still have so much pain in my shoulders from the gas and haven’t had a bowel movement yet. But the pain in my left leg is only a fraction of the pain it was. I’m a little concerned with the lack of bathroom trips. I’ve been taking things, and I’m supposed to to try going. I feel movement, so I hope the surgery corrected whatever was preventing me from going and it’s just going to take a couple more days to get it moving. I was not prepared for the hell of a period you get after surgery. I knew I would bleed, but the cramps are insane.

My question for anyone who reads this is if their endometriosis got to the point of weight loss, nausea, vomiting, diarrhea, extreme constipation, passing out, trouble walking, or anything close to those symptoms. I know women in my family that suffer from endometriosis but not to the extent I have experienced. I feel quite alone though all this. With how long I’ve been ill I feel like a burden to my loved ones. I don’t have much of a support system to help me though this. It’s all making me feel lost and scared at some points. But I am a fighter. I will overcome whatever is going on. I just have to keep strong. 🙂