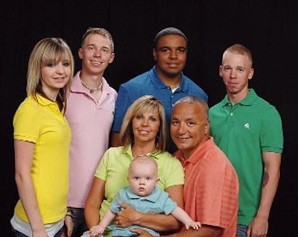 Hi, my name is Maureen Faille and I am 43 years old. Seven years ago, I was diagnosed with systemic lupus erythematosus (SLE) which is a long-term autoimmune disorder that may affect the skin, joints, kidneys, brain, and other organs. From that moment, my life has changed dramatically. I randomly started passing out only to find out I had Syncope (defined as a transient, self-limited loss of consciousness with an inability to maintain postural tone). Doctors tried fixing this with medication, but that did not help, so they decided to implant a Loop Recorder (a small device that is implanted under the skin to help identify the causes of fainting). About five days later, my body began to reject the loop recorder and it began to push its way out of my body. At this point, my doctor decided that since my passing out was getting worse they were going to implant a pacemaker (a small device that’s placed in the chest or abdomen to help control abnormal heart rhythms). Not long after receiving the pacemaker, I was still having frequent Syncope episodes, so my doctors ordered a bubble study (a technique used to obtain additional information from an echocardiogram). After the bubble study, they discovered I had a hole in my heart and, shortly after this discovery, they did what is called a Patent Foramen Ovale Closure (PFO closure).

I also noticed that I was experiencing some vision loss and decided I would make an appointment to see an eye doctor. After many tests, he noticed that I had lost the peripheral vision on my right side due to a transient ischemic attack (spelled ischaemic in British English and abbreviated as TIA, often referred to as “mini stroke”) that I had and never knew about. Two weeks after this discovery, on March 21, 2007, I suffered a full stroke from a blood clot. My stroke was on the left side of my brain which affected the entire right side of my body. I spent 34 days in the hospital learning how to talk again and use my right arm and leg. I was fitted with a leg brace that went from my waist and attached to a Dynamic Drop Foot Brace (AFO). I was told that I would never be able to walk again, which meant no heels, which I love, and this news devastated me and gave me an extra drive to prove everyone wrong.

When I was released from the hospital I continued my outpatient therapy at the hospital but continued therapy on my own when I got home. I purchased a stationary bike and would tie my foot to the peddle and I would peddle for hours. I would go to Lifetime Fitness Health Club and do the aquatic classes the best I could, then follow up with their cycle classes, once again, tying my foot to the peddle but still not getting the full results I wanted. I tore a tendon in my ankle from the muscle spasticity that I was experiencing after the stroke, so I was sent to a Podiatrist who performed a Tendon Stretch on my foot which was very painful. After this surgery I was once again informed that I would never walk normal again and that I should get a really good pair of gym shoes because I would never wear heels again. This was never going to happen.

I am very excited to tell you that a year after this surgery not only was I walking, but I went in for a follow up wearing heels. I wish this was the end of my story, but it is not. I was still experiencing Syncope with the pacemaker that was implanted a few years earlier. I had a hard fall while walking the dogs one day and ended up in the hospital. My cardiologist heard of this and came to visit me on a Sunday. He told me that while at a conference he heard of this new pacemaker made in Germany that vastly improves Syncope, so before I knew it I was back in surgery having a new pacemaker put in. Even though my leg had improved greatly I was still having some spasm issues with it, so my doctors prescribed Baclofen to help. Unfortunately, I was on a very high dose which was not completely helping, so my doctor recommended I have a Baclofen Pump implanted, just another surgery. After having the pump in, things started looking up for me. In 2010, I signed myself up for the 8K Shamrock Run, which happened to land on the third year anniversary of my stroke and, one week later, the Presidential Stair Climb and I am proud to say that I completed both of them.

The Baclofen Pump needed to be filled every two months and with every refill my doctor would decrease the dosage. Since I felt I was doing so well, I asked my doctor to remove my pump and he said if they weaned me off the medicine and I was okay they would allow this. After a year of having the pump in, I had the pump removed, but not until after doing the 2011 Presidential Stair Climb. Unfortunately, not long after the pump was out I noticed much of my spasms coming back, so again I was back on the Baclofen medicine, but this time an even higher dose. After dealing with how awful all this medicine was making me feel I went back to my doctor and we both decided putting the pump back in was the best thing to do. So, October of 2011, I was back in surgery. My recovery was not going so well this time, actually, I felt something was wrong. My doctor suggested I try therapy and after that did not work I went in to have injections in my spine.

A few weeks later, I went back to the doctor to find out that the catheter was pressing on a nerve and my body did not want this foreign object in. Seven weeks later, I was back in surgery having this pump taken out and a new one put in, in a different area of my stomach and spine. Almost two weeks out, here I sit writing it all down. I have big hopes that my body will fully heal and not reject this pump, I hope to be recovered enough to do the Presidential Stair Climb in March of 2012. I hope to get much more awareness out there on Lupus.

Up until seven years ago, I had no concept of what Lupus was or that there was a Lupus Foundation. After being diagnosed with Lupus I discovered that there was a Lupus walk in Chicago, so I got eight of my friends and family together and attended. After my first experience with the walk I did some research, made some phone calls, and found out there were several walks yearly. So, two years after my first walk, I had my family and volunteers at the Chicago walk, where we worked the tents, organized the route marshals, walkers, and sold Lupus bracelets. We were told that there is a western suburb walk, so we contacted the (LFAI) Lupus Foundation of America, Illinois Chapter, and got on the walk committee for the upcoming year’s walk. That year we volunteered at both the Chicago Walk and the Naperville Walk, but this time we had at least thirty friends and family helping us with the set-up, tear- down, route marshals, kids’ tent, selling of Lupus items, passing out water, working the sign-in tent, and working the food tent. This went on for two years with us having our volunteer numbers go up. I felt there was so much more that I wanted to do, so I reached out to our local town, Bartlett, and asked if we could have a Lupus Candy Day drive. The town was more than happy to oblige but, unfortunately, we were rained out three weekends in a row.

Not giving up, I knew that our town, Bartlett, had an annual Fourth of July Parade and I thought how wonderful would it be to be part of that. With one phone call we were given the okay to be part of it. I then contacted my family and friends once again to join us by decorating a couple of vehicles; I had everyone wear butterfly shirts, lupus shirts, or purple clothing. At our very first Lupus Awareness Parade, we were passing out Lupus Pamphlets and candy. Now I have even bigger plans for next year’s parade, more volunteers, and hopefully a float.

This past October I was also asked by the LFAI if I would tell my story briefly at the first Lupus Awareness Rally at the Thompson Center, Downtown Chicago. This was my first time sharing my story to a crowd and I loved it. It does not stop there; you see, I have always wanted to have my own team to walk for me, with my own team shirts and sponsors, but I used all my friends as volunteers to help in the walks, so having them walk would be difficult. For this upcoming year, I wanted a great design for my team shirts, something different, something that would stand out. Not knowing how to design anything, I talked to my brother, Wayne Faille, and he came up with a great logo for my team, “Keep on Truckin”. The logo is a butterfly with legs trucking along. The meaning behind this to me is, even if you have a broken wing, you still have your legs to get you around. Never give up when you hit an obstacle, because you can always find an alternate way.

Yes, there is even more, for I was asked if I wanted to start a walk in my hometown of Bartlett and, of course, I eagerly said yes. I have made some contacts at the village and we’re still waiting for the approval so we can begin yet another mild stone with my lupus journey. I have also created a Twitter and Facebook page which is strictly to communicate with other people with Lupus and create more awareness. I am excited to see where this journey will lead me, maybe a celebrity will come out to support us, maybe some news coverage, or maybe create just as much awareness as all other organizations get.