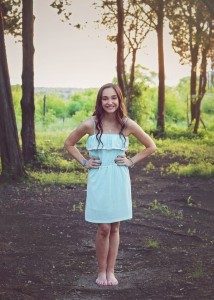 Today I was diagnosed with endometriosis, and here is my story leading up to today.

I have always been active my entire life. I did competitive gymnastics ever since I was 4 years old. I never complained, had an incredibly high pain threshold, and had never been sick with so much as a cold.

When I was 9 years old, I came home from a gymnastics competition, feeling normal. A couple hours later, I moved slightly, and I felt this sharp pain in my stomach. It continued to get worse, and I tried to keep it to myself until finally, I was screaming in pain and went and got my mother. She knew instantly that it was serious. She took me to the hospital, and they went through everything they could find–my appendix, an undiscovered injury from that day’s competition, anything they could think of. They gave me morphine, which put me to sleep and gave me some moments of ease. I remember opening my eyes and seeing a room full of doctors surrounding me. They told me they believed I had an ovarian cyst rupture. My mother was puzzled and probed them about it. How could a 9-year-old, 50 lb. little girl who hasn’t even had her first period be a candidate for something like this? The doctors were just as astonished as she was, but were confident in their diagnosis and confirmed it with an ultrasound. They told me this was a rare thing to happen to someone with my logistics, but felt I should be fine and that I should just keep an eye on it and tell my pediatrician if any more problems should arise.

A few months after that, I started having stomach problems. I had always had chronic constipation, but I began to have stomachaches and bouts of throwing up at least once a month. My doctors dismissed it as a nervous stomach or just a cold I picked up at school.

When I was 12 years old, I got my first period. It was so painful, I couldn’t even go to school. The pain made me throw up. My mother said that it was just because it was my first one, and it should subside. To this day, I still have the same symptoms during my period. I continued with this painful period experience, but the throwing up seemed to ease up a bit to about once every 4 months or so, giving me some relief.  Throughout high school, I had at least one cyst rupture every year, usually the week before my period. They gave me the same answer every time: this is normal. You’ve only had your period a few years. It’s just your body regulating itself.

The summer of my senior year, I had 5 ovarian cyst ruptures over the course of 3 months. I had no relief and was miserable. As soon as the symptoms went away (vomiting, extreme abdominal/pelvic pain and back pain), I just had another one. I began to just tough them out myself at home because the hospital started making comments that I was just there for the pain medicine. My primary doctor said she believed I had PCOS, and she suggested I start Yaz birth control. She mentioned that this would most likely effect my fertility if we didn’t start treatment.

I left for a college that was 3.5 hours away a week later. The second week of school, I had another ovarian cyst rupture. I was on my own with just my RD by my side, and the hospital treated me like I was just a drug-seeking teenager. I came back to school and attempted to start my first semester of freshman year. I didn’t have another cyst. Instead, I had chronic nausea and vomiting every single day, multiple times a day. I was so, so miserable.

I went to a new primary doctor. She said that the chronic vomiting was not due to my recent diagnosis because she didn’t believe I had PCOS. Her main claim against my case? “PCOS patients are generally fat and have excessive facial hair. You seem like a normal 18-year-old girl.”

We did test after test, ultrasounds (which seemed slightly abnormal but nothing too significant), CTs, cat scans, X-rays, blood work, urine work, and my first Pap smear. I am not and have never been sexually active, except for when I was molested at 6 years old, and this doctor insisted on a Pap smear. I cried the entire time. She told me it shouldn’t hurt that much but didn’t see anything abnormal. She finally sat down and said she could no longer do anything for me. She could pump me full of Zofran for nausea, but she saw nothing wrong with me and would no longer seek a diagnosis.

I tried to make it through college, but I was constantly absent and ended my first semester of college on academic probation. I came home for Christmas break and had yet another ovarian cyst rupture. This time was a little different, yet it felt exactly the same. The ultrasound showed no enlarged cysts or free fluid, however, all of my pictures seemed slightly abnormal. My doctor sat me down and told me he believed I had something called endometriosis. He said that all of my symptoms matched the description and that we should begin seeking treatment. That was today.

Today is day 1 of my life with endometriosis, and I have no idea what to do. I hope this is the answer. I pray that a simple laparoscopic surgery will give me my life back. Today is day one, and I’m not going to stop until it’s cured.