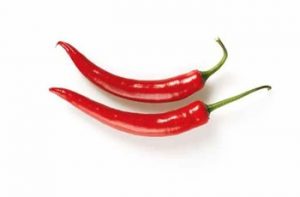 Dieting is rarely an exciting experience. More often, it is a grueling exercise in monotonous self-discipline, a daily battle against the forces of pleasure.

Adding to the misery is the blandness of the food you are expected to consume. While your higher brain may recognize that the quivering pile of green and white on your plate is good for you, your taste buds protest to the edge of mutiny. Is it too much to ask for a little spice?

As it turns out, spice is exactly what you should be asking for. That’s because cayenne peppers, the party starters of all sorts of exotic cuisines, are quickly becoming the dieter’s must-have ingredient.

Although widely used in South and Central America as far back as 9,000 years ago, Christopher Columbus was the first to bring the cayenne pepper to the rest of the world’s attention. Legend has it he paused his Caribbean expedition to inspect a cayenne shrub, before summoning his explorer’s pluck to pop the unknown pepper into his mouth. Although the history books prudently end there, what most likely followed was a flustered spell of coughing and choking, because cayenne peppers are intensely hot. When put to the Scoville test, essentially a group of brave scientists eating chillies until their tongues catch afire, the cayenne starts at an impressive 30,000 Scoville units, nearly thirty times that of the jalapeno pepper.

The cayenne pepper gains its fiery kick from a substance called capsaicin. You know that warm sensation that envelops you after eating a spicy chilli? That is produced by the capsaicin receptors in your central nervous system reacting to the capsaicin prevalent in the chilli. Essentially, your body begins to heat itself up, which explains the sweating that can also occur. The technical term for this is thermogenesis, and although it is always occurring to some extent in your body, it kicks into high gear after ingesting capsaicin. The good news is that thermogenesis relies on burning fat to produce heat, and this in turn increases the rate of your metabolism. Therefore, that heat you feel is actually helping you lose weight! In addition, capsaicin also acts as an appetite suppressant, helping you avoid those cravings that can erode even the best-intentioned diet. As if all that wasn’t enough, the cayenne pepper is also rich in vitamins, with one small serving providing just under 30% of your daily Vitamin A requirement.

All this sounds great, but tearfully choking down whole peppers doesn’t sound like a lot of fun, right? Thankfully, adding only a small amount of cayenne pepper into your diet can produce the necessary results. Try slicing the pepper into thin rings and mixing it into a salad or stir-fry, or adding it to a sandwich. Alternatively, you can buy cayenne pepper in powdered form, it is just as effective, and use it as a guilt-free salt or black pepper substitute. For a late-night treat, you can try sprinkling just a touch of cayenne powder over a cup of hot cocoa. Dried cayenne flakes are also widely available, and can provide an extra zing when added to rice or soup.

By now, that pile of green and white should be bursting with flavor, so it is time to focus on exercising. Try drinking a glass of water mixed with about a sixteenth of a teaspoon of cayenne powder directly before vigorous activity. You’ll be amazed at the energy burst this provides. Also, the cayenne increases your metabolic rate, making the exercise you do more effective. Over time, you can increase the amount of cayenne powder you use, to gain an even greater boost.

Previous Women and Comfort Foods: Moderation is the Key
Next Are Your Food Portions Making You Obese?