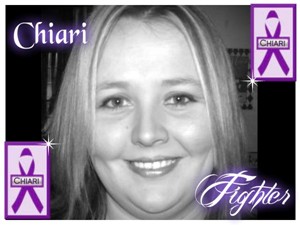 I am a wife, mother, girl-scout leader, college student and I work part time. Shortly after my 29th birthday, I began having severe headaches. I have always had a high tolerance for pain. After gallbladder surgery and both of my C-sections, I rarely had to take the pain medicine. The pain got so bad that I was taking 800mg Ibuprofen like candy. The pain medications only slightly helped. On my way to class my chest began to hurt, and I became worried. My mom decided to check my blood pressure and it was unusually high. I had to take care of myself because my kids depended on me. I visited the Taylorville emergency room, where I was treated like an addict and told that it was all anxiety to visit Taylorville Mental Health. I know my body, and I knew that this was not the case. I tried to just ignore the symptoms, but my blood pressure remained high. I visited my primary care physician and was then put on blood pressure medicine. We all agreed that my weight could have triggered the blood pressure, and in return the blood pressure was causing the headaches. I took the blood pressure medicine and tried to watch my diet. My blood pressure improved, but my headaches remained as severe as ever. We then came to the conclusion that the headaches were causing the blood pressure. After me throwing fits and totally annoying the staff at Springfield Clinic, my doctor ordered a MRI.

In the days that followed, I questioned myself. Perhaps I was subconsciously dramatizing this whole thing? Was it the stress? Did I just need a reality check? Was I just being lazy and needed a break? I continued to pop Ibuprofen like candy and anxiously awaited the MRI results. I was very much aware of what the ibuprofen could do to my stomach if I continued to use it like this. I was also asking myself  ‘why me?’. I could not understand why all of a sudden I could feel so bad. I did not want to carry my youngest daughter and I had no energy to do anything. I was blaming the majority of my symptoms on my weight. I figured the headaches could be extremely bad sinuses. I was worried that I would need sinus surgery.

After a few days that seemed like eternity, I was traveling in my car for work related business, when the call came in. The nurse could not even pronounce what I was about to hear. She did her best to pronounce it and then spelled it so that I could write it down, Chiari malformation type 1. I asked what that is. She replied, ‘The doctor is referring you to a neurologist and I really do not know much about it, but don’t worry’. I hung up the phone and the tears flowed. I could not handle what I had heard. I was devastated before even knowing what it was. I made many phone calls, and all anyone could say was ‘Calm down we don’t even know what this is, everything will be okay’. I was very much aware that they were only trying to support me and comfort me. However, I had just been told there is something wrong with my brain!

I returned to work where my co-workers tried to console me. Later that evening, I decided to search online for answers. Chiari malformation is basically a rare disorder that affects 1 in a thousand people. If often goes un-detected and is associated with many other disorders. It affects every part of a person’s body. Some people can live perfectly healthy normal lives. The severity of this disorder ranges from disabling headaches to death. Chiari is suggested to be more common in women, and more severe in children. I learned that this is something I could have been born with. I read that if symptoms are not present in the childhood years that a trauma could bring on the symptoms; or in many cases the symptoms arise around the age of 30. Wow, I had just turned 29!

The day came for my neurologist appointment. What a disappointing day! I had high expectations that she was going to have the answers for me. Instead she told me the total opposite of everything that I had learned. She first said that my MRI was normal. So, I asked about the chiari. She told me I have chiari, but she doesn’t think that it is what is causing my symptoms. She said she did not understand if I was born with this, why I would just be getting my symptoms. She then decided to blame my weight, and did say she thought I had pseudo tumor Cerebri and papilledema. I told her how unbelievable, that just 2 weeks previous I was diagnosed with Chiari and now she is saying I also have two completely separate disorders that are not even related to the first. She shrugged her shoulders and requested an optomologist appointment and a spinal tap. I refused the spinal tap. I wanted to talk to the optomologist and further educate myself before any procedures. Before leaving, I asked if she is even knowledgeable in the case of Chiari. She admitted to knowing what it was but not being extremely aware of it.
I returned home and resorted to the internet for more answers. I joined as support group for Chiari on Facebook. These people treated me like family. They offered advice. And all of them urged me to seek a chiari specialist. I also learned that many of them had the same combo as me, chiari, pseudo tumor, and papilledema. These three are related! They sent me a website that had every Chiari specialist in the United States. The only one in Illinois was Dr. David Frim at the University of Chicago.

The optomologist confirmed pseudo tumor cerebri and papilledema. He also said I could lose my eye sight if this was left untreated. He admitted to having knowledge of chiari and agreed with me that a chiari specialist would be my best option.

After pulling some strings to get my appointment with Dr.Frim. I was relieved and scared. He ordered more MRI’s and wanted my information faxed to him. I ended up with four MRI’s in less than 30 days!! The appointment was about a week after mine and my husband, Shawn, had our four year wedding anniversary. We planned a nice trip to Chicago and wanted to enjoy ourselves while there. Dr. Frim was very nice. I loved his bow tie. The appointment was long, but he took his time to answer all of our questions. I finally felt safe and felt like I had someone on my side. He explained the possibility of brain surgery or a shunt. He sent me home with a medicine called Diamox and physical therapy as an alternative for the surgery. He agreed with me that surgery was not in the picture at this time, with hopes that the alternative would work for now. He also confirmed the lack of knowledge the original neurologist had, by saying a spinal tap would have been dangerous!! I thank God that I did not listen to her, and instead found Dr.Frim!

Today the medicine and the physical therapy have helped. I am now currently awaiting my three month follow up with Dr.Frim. This time, it will be a girls trip with my mom and daughters. I will continue to support my fellow chiarian friends in the fight to raise awareness! I was fortunate to find answers from a chari specialist, while so many others do not have the option!