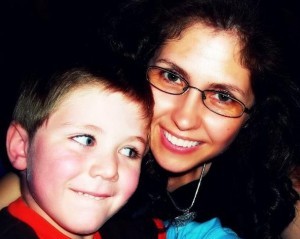 While out of town one weekend, I went shopping with a cousin of mine. We decided to stop at a Mexican restaurant for lunch. About half way through eating I started feeling weird. I pushed my plate aside but didn’t say anything. I kept feeling worse and worse. Finally my cousin asked if I was okay, she said I had lost all color. I told her I wasn’t sure but I felt like I was going to pass out. I went to the restroom and tried wetting my face with cold water but the feeling worsened. I thought maybe I had gotten food poisoning. I felt like I was dying but I couldn’t really articulate what was happening. I felt like someone had dumped a bucket of something on top of my head and it went through my entire body pulling all of my strength out, making my heart race, and my head feel really weird.

I went outside and literally laid down on the sidewalk! I called my husband who was home with our sons and asked him to pray and to please call and get a prayer chain going for me at our church. I told him I was dying, that is honestly what it felt like. When my cousin came out she drove me to a friends home where my brother and sister in law were. My sister in law had to drive me and my daughter home because I couldn’t. Once home I started throwing up and had diarrhea. I figured I was just suffering from food poisoning. I went to bed and slept all night. When I got up the next morning I felt fine and I decided to get ready and go to church. Within minutes I was sick again. My husband took me to an urgent care facility. The doctor decided I had a stomach virus and gave me cough syrup!! I cried in anger!! By the next day I felt even worse so we went to my family doctor. He did blood work and told me he’d call with the results. He called and said that everything looked great.

However, I started dropping weight, my heart would suddenly start pounding and racing, it would get up to 170 b.p.m, and I’d hit the floor. I would have what seemed like convulsions, my entire body would shake so bad that my family would try to sit on me to hold me down and still. It was a terrifying time. In four weeks I’d lost 23 pounds, had numerous tests done, and still had no answers. On the fifth week I went back to my family doctor for probably the fifth time. He looked at me and said, “Lisa, you are perfect on paper. I’d kill for your blood work. What do you want me to do?” I knew from the way he was acting that he was beginning to think this was a mental issue. I said, “I want to see an endocrinologist.” He said, “your thyroid is perfect.” I said, “I don’t care I want to see one.” He set me up a visit with a local endocrinologist. I sat in his office waiting, he walked in looked at me, and said, “did you know you have a goiter on your thyroid?” I was like, “NO!” He said, “yes you do.”

He proceeded to show my husband and then he did blood work. He prescribed me medication without waiting on the results of the blood work which made me uncomfortable. I took half the dose for two days then stopped it. Just felt like something was wrong. I called the family doctor’s office back and gave them the name of the endocrinologist I wanted to see. She had treated a friend of ours daughter who had thyroid cancer. I just felt in my heart I needed to see her. I know it was God leading me. Her office called me with my visit on July 24th. It was the first week of April at the time. I cried and said I’ll be dead by then. She said well the doctor is only working part time now but I’ll talk to her and see if she will make an exception. I told her to tell the doctor I’d come at midnight if that’s what it took to see her. She called me back a few minutes later and said the doctor will come in on her off day which is Friday to see you if you can come. I said I promise I’ll be there. At this point in my life, I could barely walk. I had no balance nor any strength. My husband or daughter would take me to the sofa where I would spend the day. I could not drive. I had a baby who was two years old and my 16 year old daughter was having to take care of him, my other son, and me. I hated it. But I laid in bed at night having the convulsions and praying to God that I’d live to raise my children.

On that Friday, my best friend who had stuck by me and took me to many of my appointments, loaded me up and we drove over an hour to this new doctors office. I went in and she looked over everything, checked me, and then talked to me. She said, “Lisa, I believe you have something called Hashimoto Thyroiditis.” She asked if I’d taken the medication the other doctor had prescribed. I told her I did for two days then I quit. She said that is a good thing because it could have killed me! I was going through a thyroid storm. My body was attacking my thyroid gland and killing it, because it makes your thyroid hypo one minute and hyper the next you cannot be treated until it evens out. I went through a few more months of terrible times. I knew what was wrong now but couldn’t be helped. I prayed and prayed and one day God answered. I knew that I was healed. It wasn’t a miracle but a slow healing process. I had dropped so much weight that the doctor told me that she would hospitalize me if I had lost any more when I returned. But I did start getting better. I remember when I finally went to her office and she knew the storm was about over, she handed me a pamphlet and asked me to read it. She said she didn’t want to scare me before but she wanted me to know how serious it was. It told me how during those spikes you could have a fatal heart attack. Well, thank God I did not but I was left with the after effects.

I have an abnormal heart arrhythmia due to this. I have been on medication for my heart since this happened. I have normal low blood pressure which made it very hard to find something that didn’t drop mine so low that I couldn’t function. I am also on thyroid medication. As an auto immune disease there is no cure and there are ups and downs. I feel great for days then suddenly I wake up and have a terrible day. I have numerous nodules on my thyroid due to this disease. I have to have ultrasounds to watch them and at times a biopsy if there are any changes in any of the nodules. I can tell when my thyroid is inflamed due to the way it makes my throat feel as if it is being squeezed and I feel I have to fight a little harder for a breath or to swallow. I knew nothing about auto immune diseases and had never heard of Hashimoto Thyroiditis until this happened to me. I know lots now! But I also know you can’t give in! You must keep on fighting and that’s exactly what I do!! FLAG!!