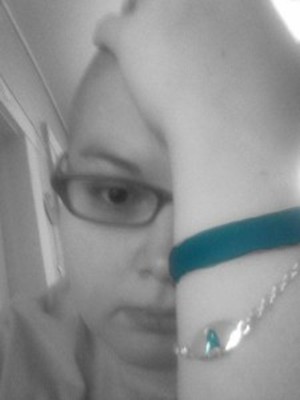 I am 30 years old. I have seven children ages 1-13 and I have a loving husband. On December 21, 2013, I started a second period, which I have never done, and I bled and bled. My gyno’s nurse said it could just be stress from the holidays, and that they could get me in at the end of January. I took the appointment, but I knew something was wrong. On January 3, 2014, I got a pain in my upper stomach that would not go away. It was annoying, but didn’t hurt too bad, and I was still going.

I started to gain weight rapidly, but chucked it up to the holidays. However, I wasn’t eating a lot because I was so tired and not feeling well. I went to the ER three different times in January. Two times I had to get blood because they told me I was anemic. Every doctor I saw said I had abnormal bleeding, but I was pregnant (I had gotten my tubes done February of 2013) and it probably wasn’t cancer since I was so young. I got into my primary doctor and he said I had an ulcer and prescribed me medicine. My gyno finally got me in earlier than my original appointment because of the ER visits. He scheduled me for an ultra sound. That is when I got the news.

I had a massive tumor, 33 cm. By this time I looked like I was nine months pregnant. What? It will have to come out. So, he set me up with an oncologist gynocologist because I had markers that pointed toward cancer. He too said that he didn’t think so because of my age. I had surgery January 29, 2014. The ironic thing is, the doctor who did the surgery was t he specialist who didn’t think I had cancer either.

Surgery was scary, I had lost a lot of blood and had to get blood. It was life or death at this point. I wrote a will, planned my funeral, and wrote letters to each of my seven kids, my husband, and loved ones. I really feared leaving them at this point. I’m a christian, so death isn’t scary. My beliefs tell me I’m going to heaven when I die and I believe that. I was worried for the ones I would leave behind. Going into surgery I had a 80/20 chance that it was not cancer, odds in my favor. The doctor said he was only going to remove the tumor, an ovary, and maybe my cervix/uterus. Coming out of surgery my odds for cancer dropped to 50/50. The doctor removed everything: a complete hysterectomy, all my linings and gutting’s, my appendix, lymph nodes and even had my colon and stomach checked for cancer. On February 11, 2014, I received the news it was stage 2 ovarian cancer. I was told I had to do chemo. When they did the surgery, the tumor ended up being 35 cm. It ended up spilling inside of me. Since it was so big the doctor had to cut it, so I ended up having to do chemo.

I finished that up and now I am in remission. I have to go every three months for scans and blood work. However, I am in remission. I found out on May 6, 2014.  That is the best mother’s day present ever! I Fought Like a Girl and won! It can come back, in fact there is a 40% chance it will. However, if it does I will fight again! I have an amazing support system and so does my family. Our church, family, and friends. Without them I could not have done it!