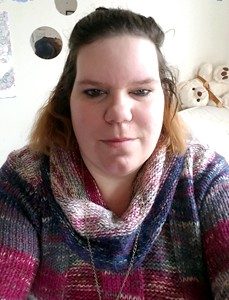 Hi, I am Kimmie, and I am currently 33. I was 31 on April 17, 2014, the day that my world came crashing down. I was like most young people and didn’t pay much attention in school when they talked about self breast exams. I thought I was invincible and nothing bad could happen to me. I thought I would never face death at such a young age.

It was the middle of March. I can’t remember the exact date, but I was lying in bed. It was almost 2 am, and I couldn’t sleep, but I almost never sleep. For some reason, the thought came to me that I had not done a breast exam in forever. Now, why I thought this, I do not know. I never really even knew how to do one. Just occasionally in the shower, I would feel around, ya know? So here I am, in the middle of the night, feeling around. My left breast was okay. When I got to my right, I thought I felt something weird, but wasn’t sure. I jumped up from bed and ran to the door. I was gonna get my mom. But I stopped with my hand on the door, and was like, wait it’s the middle of the night. I’m just crazy. So I laid back down and tried to calm myself.

Over the next few days, I did not tell anyone. I would just constantly feel for the lump, and sometimes it was there, sometimes not. By this point, I thought I was crazy. It wasn’t until I was walking into work, and I felt the hardness of the lump, and I couldn’t move it or squish it down. The panic set in, and the tears came. My coworker Abby asked what was wrong, and I told her. She asked if she could feel it. Mind that she is an older women, and I felt like I needed someone to verify that it was there, so I would know I was not crazy. She confirmed something was there, and again, tears.

I called my OBGYN to see if I could get in. I didn’t know who else to call, and she was out of town. So I called my primary, and she said she could see me, but not till Tuesday. It was Friday when I called. I went all weekend, fearful and on edge, but I didn’t tell my mom. I did not want to worry her. It was probably nothing, right? Just a cyst. So when I saw my doctor that Tuesday, she said I needed a mammogram and to see the surgeon!! Why a surgeon???? I was completely freaked out. But I made the appointments, I got them done, and I saw my surgeon. After he said I needed a biopsy, I finally told my mom. I didn’t want to bother her with my issues, ya know. I pretty much isolated myself in the beginning and did all the appointments alone.

Just like on April 17th, when I walked into the surgeon’s office, expecting him to say it was a cyst. He walked in and said, “I am so sorry. I did not expect this. The radiologist did not expect this. But it is cancer.” Holy Hell, are you freaking kidding me?!??!? I am 31. I have a six-year-old depending on me. I can’t have cancer. But I did, and I had to figure out what to do. I was stage one, grade one, inductal in situ cancer. Options were given–lumpectomy or mastectomy, radiation, see an oncologist, so many things thrown at me. I was lost, confused and scared to death. I saw the oncologist, and she delivered another blow to me. I cannot have any more kids. I never wanted my daughter to be an only child. I’d had one miscarriage but wanted another baby. This stupid disease was taking everything from me. I decided to just remove my breast. I wanted them both gone, but my insurance wouldn’t cover it.

On May 12, 2014, I had my surgery. They took it off. They said I had clean margins. My cancer had not spread. I would be okay. Okay?!?!? I’m half a woman. I can’t have another baby. How the hell am I okay? But at least I was alive. I thought I would be done after that surgery and be on the mend. But no, things don’t work that way for me. I got an infection that almost killed me. I had to sit in a lawyer’s office and decide who would get my child if I died, and sitting there, making a will, I wished I was dead because I couldn’t think of leaving my child alone, to not be with her.

So I was getting better, I guess. I went back to work. I put on a happy face for everyone. Then in September, right before my daughter’s birthday, I started getting horrible pains in my side. What now, I thought? Possible ovarian cancer was what it was. On November 14, I had a partial hysterectomy. I lost another part of my womanhood. I cried for my children I would never have. I cried for the life I dreamed and lost. I just cried.

But I am a survivor! I have my bad days. I have my days where I just do not want to go on. But I know I can. I did it. I beat the odds. At 31, you do not think about death. You dream about life. But I had to face it, and I kicked its ass. I still deal with depression, with bad days, but I will be okay. I am glad for places where I can go, like here, where I have support. And I try to educate other young girls about the importance of self checks. If I can help anyone, then I know my story is helping others. Cancer took most of my womanhood, but it won’t take my life or my spirit.