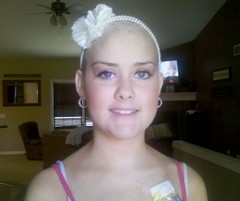 My daughter graduated high school at the end of May. She was 17 years old. Around that time, she complained of being tired. I explained it away by telling her to quit going to all of the graduation parties and staying out so late. Then she said that she lost weight. She had broken up with her boyfriend of three years, so I explained that also. Well, she told me that she had a lump in her right breast. I immediately became sick to my stomach.

My gynecologist got her in that day. He wanted her to see a surgeon. I was able to get her in the next day! I had worked with this surgeon in the operating room and trusted him with my daughter. He tried to aspirate the lump, but nothing. He was going on vacation and it was time for her menses to start, so he said that the horomones should shrink it, but we would get an ultrasound when he came back.

By the following week, Kayela’s lump had actually increased in size. We saw the surgeon on Monday. I explained the weight loss and fatigue. He stated that it had nothing to do with the lump. I just kinda said OK. Surgery was scheduled for Friday – Kayela’s 18th birthday! We had pre-admission testing to do on Thursday. Upon arrival, she was short of breath. This was odd. I checked her pulse and it was 140! The only test that was ordered was a urine pregnancy. I requested an ekg. The surgeon was called in surgery and he agreed. The test was abnormal!! I then requested a chest xray. He was called again in surgery and said no. He said that we could go to the ER. So, kayela and I walked around the corner and checked in.

She was given an IV – still a high heart rate. I requested the chest xray. The wonderful doctor obliged. He came into the room and explained that he saw the lump in her chest and wanted to do a CT scan. We were happy! Someone was doing something for us! After what seemed like forever, the doctor came in and stated that Kayela was anemic. We knew that since she had started her menses. Then he asked me to step outside of the room. My worst nightmare awaited me on the other side of the door! He told me that Kayela had cancer, and that it was Lymphoma. I remember shaking all over and them sitting me down in front of the computer screen. I saw this big white image inside my daughter’s chest! She had a 10×13 cm mass that had pushed her heart over to the right and towards her back As I am trying to come to grips with this, I kept thinking of how my uncle had just died 6 months prior from Lymphoma. The doctor gave me the option of telling my daughter. I took him up on it. Kayela is a very private person, and I wanted to tell her. That was the hardest thing that I have ever done in my life…

The ambulance company was already enroute. I had to make the decision to go to an adult facility or a children’s hospital. I made the best decision that night. We went to Nationwide Children’s Hospital in Columbus,Ohio. I have been a nurse for 12 years. The hospital, nurses, and doctors have blown us away!! We have been treated like family. The doctors encourage you to ask questions! Kayela was diagnosed with Lymphoblastic T Cell Lymphoma. The mass in her chest had pushed between her ribs and that’s how we saw the lump in her breast. It’s estimated that she had the cancer around 3 weeks.

We were very fortunate that it had not spread to her bone marrow. The mass is gone, but we have 2 years of chemo. I know that my girl is a fighter. I see it in her beautiful eyes every day. She has brought our small town together. Everyone is so encouraging to our family! We have the whole town pledging to fight like a girl!!