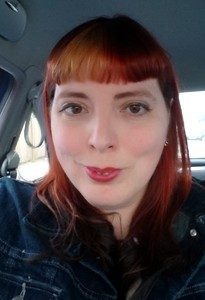 I started my periods at 10, and from the start, they were painful. I was told that the cramps were normal, despite the fact that I regularly threw up or fainted from pain, and my bleeding couldn’t possibly be as heavy as I claimed. No one actually bothered to measure it though. At 16, I was finally old enough that I could go on the pill without parental permission to deal with what I still thought were just awkward periods. This gave me immediate relief, and I stopped missing 2-3 days of school per month. I remember feeling angry at the assumption that the pill was only for sexually active girls, which meant I suffered for 6 years because it was more important that I not seem ‘easy’ than that I receive help. I did better at school after this, aced my GCSEs and A levels, and went to university.

However, at this point, the migraines which run in my family kicked in, and the doctor refused to prescribe the pill to me, as there was a high risk of stroke. I experimented with all sorts of contraception and eventually settled on the depo provera injection. Little did I know, while undiagnosed, I was working my way through the usual treatment options for endometriosis, masking my own disease symptoms. Depo helped me greatly, but it also led to considerable weight gain. I went from a size 14 at university to a size 18-20, despite an active physical job as an archaeologist. Again, I was told that I couldn’t possibly be reacting badly to the hormones and that I must be lying and eating more than I claimed. This time, no longer an easily bullied young girl but a confident professional woman in my mid twenties, I told the doctors they were talking nonsense.

I was concerned about my increasing BMI, though my blood pressure was still normal, and worried about the very peculiar and rare side effect of breast milk (!), so I decided to come off the depo. For the first time, I was hormone-free as an adult. I found that the hormones had been radically affecting my moods and badly affecting my sexual desire, but I also learned how much my periods had deteriorated in the 10 years on depo. They were heavy, unpredictable, and even more painful. I started to struggle with relationships and work, as outdoor work in the cold made the pain worse. The only bright spot was a new lovely man who, like me, did not want children and never pressured me when our physical relationship was sporadic and limited by my increasingly apparent serious gynaecological issues. He stayed with me through two years of gruelling tests and scans, from meeting at 27 to eventual diagnosis via laparoscopy at 29. We married shortly afterwards, and he volunteered for a vasectomy, concerned that an accidental pregnancy was likely to be ectopic and knowing by this time that all hormones affected me badly. I have never been so grateful for anything. During our courtship, I was rushed into hospital numerous times, twice with burst ovarian cysts which left me screaming in pain. He has never faltered in his support, but I know emotionally this disease is hard on him too. I have worked my way through the entire NHS treatment pathway in the 6 years that we have been married. Nothing really helps, and everything seems to have terrible emotional or physical side effects. Recently, I have also been diagnosed with polyps, after I gave ‘birth’ to two chunks of flesh and gristle. I thought I was going to die at the time, but afterwards was able to laugh about it. We call the polyps my mutant flesh babies!

Life is difficult every day. My friends have had to become used to me flaking out on social occasions at the last minute, and I rarely book tickets for events in advance. I drink less because I know I might have to take codeine, and it doesn’t combine well with alcohol. I had to give up my beloved field archaeology career and move sideways into heritage management and a desk job. Even though I use my accrued flexi-time and home working in order to mask my frequent absence from illness, they still grumble. I know that this disease is incurable, but I have evolved coping strategies. I carry chemical heat pads and painkillers at all times. I also use a menstrual cup for my heavy periods, allowing me to get up to 6 hours of sleep rather than the 2-3 hour stretches that I used to have between changing protection. I took up burlesque dance classes to come to terms with my various operation scars and to try to love my body again, even though it has betrayed me. I get emotional support from the Endo UK Facebook group and my husband, but have also started to be more frank with friends and at work. I can’t hide this disease anymore, and I have to fight all the voices from over the years, telling me that this is ‘normal’, that I am lying and making up my pain. I’m not a liar or a weakling. I am a fighter. I need to give myself permission to cry about this as well as to laugh about it. I need to fight like a girl.