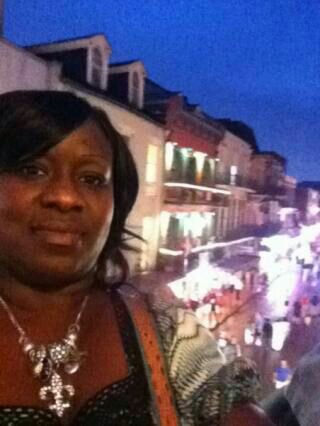 There was a time in my life when I didn’t even think about breast cancer but after having been diagnosed and going through chemotherapy, it has become a huge part of my life. It has left a permanent impression on my life that cannot be erased but I will continue to fight like a girl.

I first notice the small hard lump in the shower of Rapides Parish Regional Hospital. Greg, my husband had an accident on October 30, 2013, involving his Vermeer Hay Baler. His left hand was caught in the belts causing forth degree burns; he went through four surgeries and ultimately lost his hand to infections setting in. He needed an amputation. The lump I thought was not too big of a deal, after all I had a few lumps in my breast before that were just clogged ducts. I figured I wouldn’t say anything to Greg and just get it checked out later when he was released form he hospital and then I could go and get a breast screening test done. Well a month went by and the lump seemed to have gotten bigger and harder. Now I thought it was time to let Greg know. I told him and we talked about going to the doctor to have the lump checked out. We both told each other it was probably nothing to worry about. I called and got an appointment with the Hattiesburg clinic on January 8, 2013.

During the breast screening the doctor advised that the lump require addition testing and I was scheduled for a mammogram at Wesley Hospital. The mammogram was uneasy. I was okay until I was told that the mammogram results required additional testing and now I needed do have an ultrasound. I was nervous and all kind of thoughts were running through my mind during the ultrasound. The nurse asked a few questions such as when did you first notice the lump? Does it hurt at all? I looked at the screen and asked what she was the huge black image on the screen. She said it was a lump that measured 3.6 cm. She asked again when was it that I first notice the lump. When I gave her the answer she jumped out of her chair and said she’d be right back and that she needed to show the images to the radiologists.

When the nurse did come back the radiologist came back with her this time. He explained that the ultrasound wasn’t enough testing because there were certain factors of the lump that were not clear and that he would need to do a biopsy. Now I was terrified, and I asked them to call my husband into the room. When my husband arrived the radiologist explained everything and within the hour the biopsy was done. I was told by the radiologist that I could contact my doctor for the results within 48 hours.

That following Friday I got a letter in the mail from the hospital advising me that my doctor had the results and that I should contact my doctor. When I called the clinic the doctor wasn’t in and she wouldn’t be in until after the MLK Holiday. I began to pray and I waited anxiously and nervously over the long weekend. On January 15, 2013, I called the clinic, Dr. McGee was with a patient so I left a message for her to call me. The day went by and finally at 4:30 pm the phone ring and it was Dr. McGee. Greetings and salutations were exchanged and then she laid it on me, “Katrina I am so sorry to inform you and especially over the phone but your test results show that you have invasive ductal carcinoma, breast cancer.” The room started closing in on me, I began to cry and shout, “No, no, no, not me, are you sure?” She replied,  “The radiologists and the pathologists both agree that it is definitely cancer.” She then advised that she would setup an appointment for me to talk about the next steps and possible treatments. I can’t believe it, it must be a mistake after all my family and I had just been through the worst day of our lives already, when Greg’s left hand was amputated. This couldn’t be happening. I began wondering how I could end up having cancer…was it something I ate? drank? Could it have been because I carelessly placed my cell phone in my bra at that same spot where the cancer was? What, What did I do wrong?

I began to reflect on my family’s situation, I became fully aware of all the negative ramifications of cancer, but mostly I chose to look at all the blessings that I am thankful for: my three wonderful children, good neighbors, family, the multitudes of prayers, and support. As time continued to go by, I marveled at how my husband continued to courageously, selflessly, and faithfully accomplish the simplest of tasks with only one hand. Now that we have been faced with the adversity of me having breast cancer, it is my faith in God that will bring us through.

On Tuesday, February 12, 2013, I had bilateral mastectomy surgery and that surgery took everything from me. On March 19, I began chemotherapy. I lost my hair 18 days after my first cycle of chemo began. Always sick and exhausted. I am currently considering reconstruction, which was not an option for me before surgery; I wanted my breast gone and never wanted any again. However, I have been maimed by the disease and changed forever. Even after my treatments are complete, breast cancer will always be a continued threat to my life. I know that I am still a strong woman however I also know that I am different than I was. Breast cancer took my optimistic nature and replaced it with a more cautious optimism. I don’t take things lightly anymore instead, I am always mindful that our lives can be changed in an instant. It is my faith in God that will bring me through. I Fight Like A Girl.

I am a 3rd generation breast cancer survivor. My maternal grandmother, maternal aunt, and my …