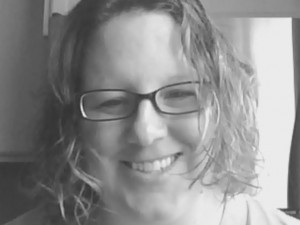 My story starts when I was about 11 yrs old. That is when I started menstruation (hell). From my very first period the pain & bleeding was horrible. My mother thought it was “normal” and gave little thought to it. I would stay home from school in such pain, she thought it was simply because I was embarrassed. She relented and took me to our family physician who told her that it was likely cysts that came and went.  I was suggested that I take monthly birth control. My mom FREAKED out! There was no way in hell was she allowing that. My pain went on and the heaviness, clotting, and bleeding went on as well. I complained but it went unacknowledged mostly. I would be sent home after soaking through my clothes, until I learned to double up on protection (tampons plus pads).

I was told by the women in my life that this was something we all go through, it will get better when you get married and have babies. But it didn’t. I had my son in 1993, via cesarean section because the cord had wrapped around his neck. Once the monthly cycle started up again, it was the same pain, heaviness, and discomfort. Except now, I could add on nausea and headaches. I bore with the pain and continued the best I could. After a series of different life events, marriage, etc. It was becoming apparent I could not get pregnant. At the time we happened to live in the same city as the Mayo Clinic. After many, many tests, nothing was found to be wrong. I took birth control pills like crazy trying to regulate my cycle, trying to make things more predictive, to no eval. I started feeling like the doctors had no compassion or care. Even my poor husband endured testing to make sure it wasn’t something on his side. I went to Wisconsin and visited specialist there. I came up with still no answers and no support. Life again took over, more events, even though the pain seemingly worse, I continued on.

We moved back to our home state (New Mexico) in 2004. I attempted to continue my college degree, but again, life events occurred that put that on hold. My mother in law passed away in 2007, followed by my father in law three weeks later. There was no time to focus on much. After things settled down some, I was talking to a high school friend, catching up, and we started to discuss health issues. She told me her same frustrations with doctors not listening or caring but she had found a great doctor in the neighboring state of Colorado, about 45 minutes away. I took his info but didn’t think much more about it. Then things started to change. It seems my monthly cycle wanted to occur a little more frequently than normal. It had done this before, but not to this extent (about every 15 days). I called a women’s clinic, scheduled an appointment, and prepared myself for another long fight. After all the basic appointment rituals were met, I was met by a lady that I swear had the heart of an Angel. She was kind, empathetic, and UNDERSTANDING. Once the exam was over and my history discussed, she looked at me and said, “I think we need to find a way out of this pain for you.” I wanted to cry! She didn’t know what was wrong, but agreed there was something wrong! I didn’t feel like a nut! She wanted me to go see a specialist, and gave me his info, which incredibly, matched the info from my high school friend! I was actually excited to go see this guy!

I scheduled my appointment, waited anxiously for the day to approach, hopeful this guy would help. I went to my initial appointment, the doctor was friendly enough, but he seemed like I was getting the same vibe as I had before. He didn’t seem too worried that anything was wrong, but he did say that a laparoscopy eval would be the only way to rule anything in or out. At this point, what did I have to lose?

The laparoscopy was scheduled. I was nervous for so many different reasons. The day of the laparoscopy came, I went under, and came back to. As I was coming back to, I remember the first thing I asked my husband was, “Did they find anything”? I wasn’t afraid if they did, I was afraid they wouldn’t. He said yes, they did. The doctor’s first words were, “I don’t know how she is walking upright.” My husband went on to say that the doctor couldn’t complete the procedure, there was so much endometriosis and adhesion’s, they couldn’t get the scope through for a thorough inspection. I was actually relieved to a degree because it wasn’t all in my head or a matter of me not being able to handle pain. I met with the doctor a week later and it was decided that a hysterectomy would be best (this was in 2008, I was 34 years old). The doctor said he would try to salvage the ovaries if possible in order to try to reduce the possibility of early menopause.

The surgery was scheduled for the next week. It was found that my uterus and bladder were completely wrapped together by the adhesion’s. So my bladder was separated from my uterus (it was also lacerated) all but my left ovary was removed. The doctor said that he was able to remove cysts and damage from that ovary and believed he salvaged it. I actually felt better after my surgery! The only pain I had was surgery pain. I was ecstatic! Looking forward to relief and healing and starting a healthy pain free life or so I thought.About two years post surgery, I started getting odd pains again. I didn’t think a lot about it. Maybe I over did it or something? But the pain got worse.

Fast forward to 2014. But first this note. I made a mistake back in 2008, I didn’t take the time to educate myself on what was going on. I didn’t make a truly informed decision that would have been best for me. I made a fast decision to get out of pain. Not that my doctor was at that time was wrong, I believe he did what he thought was best. But I should have made sure I was fully aware and informed, not only about my disease, but my surgical options etc. Now that’s done. It’s 2014, we moved back to MN. The pain was now causing me to miss work, miss family outings, etc. I geared up for another fight (this time more educated) and headed to another doctor appointment. I did not chose our local infamous clinic. Instead, I went to our local county hospital system. I was matched up with a wonderful doctor and after several discussions, review of past history, issues, and a few more diagnostic tests, one which revealed a rather large “cyst” of 6 mm on that lasting left ovary, surgery was once again decided on. To clear endometriosis, and remove the left ovary. As I am writing this story, I am 13 days post op. I find I am having a little bit of a harder time recovering, but I will recover. I will get my healthy life back and learn to listen to my body more and continue my self education on mysticism of endometriosis with adhesion’s. Thanks for listening/reading.