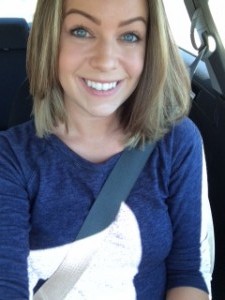 I remember reading through the stories on here a few months ago and thinking that I would one day add mine. I believe I’ve been suffering from endometriosis since shortly after my first period at the age of 9. I always had terrible period pain, but like many other young girls, believed that it was normal. I’m going to try to describe everything in as much detail as I can because I know that when I was reading other women’s stories that they made me feel hopeful when I could match up similarities. This is going to be long, so brace yourself.

My period pain was always intense and would start about a day before my period would. Diarrhea was always present with my period pain, and though it is common to have that during one’s period, it shouldn’t be considered normal, especially if it lasts more than a couple days. In my case, it usually lasted about 5-8 days. I also had regular periods, which for me meant that they were of a moderate flow, 7 days at a time in a 21-day cycle (until recently… I’ll come back to that).

About 3 years and 5 months ago, I had my first experience with endometriosis-related pain outside of my period window. I have short cycles, so it’s hard to tell if it was right before or after one. At the time, I wasn’t paying attention to it as much. Now I use an app to track when my periods start and end. My husband, then boyfriend, was overseas on a contracting job, and I had been packing in preparation for our move to Denver, Colorado. I remember standing in my room at my parents’ house and having to sit down because the pain was so bad.

Let me describe the pain for a moment. It was focused on my right side, slightly above where you would expect appendicitis pain. It was sometimes sharp and stabbing and sometimes constant and aching. It came and went, and although endometriosis pain usually correlates with one’s period or cycle, mine really had no pattern. It would hunch me over and stop me from exercising. It was always worse with movement, exercise, standing, lifting. Basically, unless I sat for long enough that the pain would fade or I laid down and went to bed, it was there. It also radiated to my lower back, which helped to confuse the situation. Sometimes it would be accompanied with nausea. In the beginning, it was less constant. Sometimes I would go months without any pain, and sometimes I would go months without relief.

I had never experienced that before, and I’m pretty sure I chalked it up to a tummy ache . The next week, when it was still happening sporadically, I started to worry something was wrong. But I’m not one to rush to the doctor, and I thought I would give it more time. It got considerably worse over the next few weeks, and with the big trip coming up (we were driving from FL to CO), I was starting to get nervous. Still, I waited on making a doctor’s appointment.

The pain became unbearable during the trip to Colorado. I finally made an appointment with a gynecologist when we arrived. She did an ultrasound and found a cyst. She said she didn’t think it had anything to do with the pain I was feeling and sent me home. That was it. She never mentioned endometriosis, and I had not yet heard of it. I had several unrelated (to the pain) appointments with her, and though the pain was still there, it was ignored by both of us.

Then it went away for about 6-7 months. I thought it was over, and in that time, I had gotten my CNA certification and was working at a long-term care unit. The pain came back with a vengeance. At first, I thought maybe I had hurt my back lifting someone, but I quickly realized what it was and became pretty depressed because I still didn’t know what was wrong. It was so bad I could barely stand, move, or do my job. I left work early one day to drive myself to an urgent care facility where I had my first CT scan with dye. They found nothing and referred me to a gastroenterologist, thinking maybe I had Crohn’s disease or something to that degree. They also prescribed me pain medications (including high dose narcotics), none of which ever worked.

I made my appointment with the gastro, and he told me he thought it was in my head and gave me some medication for that, which I filled, but never took. I came back, and he scheduled a colonoscopy to rule out Crohn’s and other things. A colonoscopy at the age of 23 was not my idea of fun. He found nothing, and I went on my way.

I kept suffering in silence and tried not to tell people about it because, at this point, I was starting to think that that doctor had been right and maybe it was all in my head. You couldn’t physically see anything wrong with me.

Fast forward to the beginning of 2014. I finally decided to go back to see a doctor. We now live in Tennessee, and it had been months of having given up on getting help. I started Google-ing the crap out of my symptoms and found that endometriosis sounded similar to what I was experiencing, but that I was missing some of the bigger symptoms that women with this disease usually experience (irregular cycles and bleeding). So I never asked about it. The first doctor I saw told me he thought that I had IBS. I didn’t believe it, but I tried a different diet anyway. It didn’t help, and I still thought my pain was too severe to be IBS. I never went back to see him.

I give a nurse practitioner a try, and she sent me to an orthopedic doctor for back pain. I had x-rays and an MRI done, and he found nothing. He told me he thought I had some kind of muscle problem, and when I told him I disagreed and listed my symptoms again, he flat-out ignored me. I also never saw him again.

I finally switched to my husband’s insurance and no longer needed referrals to see specialists. About two months later, my husband drove me to the ER because I was so miserable. I had another CT scan (this one without dye), blood tests, urine tests and an ultrasound that all came back fine. The doctor said it was nothing life-threatening and that he couldn’t find anything wrong. I could see the disbelief of my story in his eyes, and I began to cry hysterically. I was losing hope fast.

I started Google-ing again and stumbled across endometriosis once more. I also found information about interstitial cystitis (IC), and I made appointments with an endometriosis specialist and a urologist.

I saw the urologist first, and he didn’t believe that I had IC, but did believe that I definitely had overactive bladder or something close to that. He then asked me if I had been seen about endometriosis for the pain (first time a doctor mentioned this in my presence), and I told him I had an appointment with a specialist the next week.

I got a spark of hope from that appointment that maybe I was headed in the right direction. My appointment with the endo specialist arrived and went really well. I sat down in her office and she asked me a series of questions and immediately said she was 99% sure I had endometriosis. I felt a wave of relief and terror come over me. I wanted a diagnosis so badly that I never considered how much something chronic would effect me. We scheduled a diagnostic laparoscopy, and I was out the door.

We scheduled the surgery for a month out, around my work and school schedules. I had so much time to second guess her diagnosis that I was getting worried we would still not find anything. I also had a lot of time to really pay attention to my cycles. I had always had 21-22 day cycles until just before this last appointment, where I had my first 32 day cycle. And now, just after my surgery, I’ve had another 25 day cycle. So I’m not quite as regular as I thought I was.

I had my diagnostic laparoscopy 2 days ago on October 30th, 2014. It confirmed what the doctor thought. I had severe endometriosis deeply implanted in 10 areas with some scarring around one of my ovaries. She got it all. I’m still in a lot of pain from the surgery, but now I feel like it was well worth the wait! It took me about 3 years and 4 months to get diagnosed and another month to confirm it. I had been crossing my fingers a doctor would opt for surgery, and I owe my life to the doctor that did. Thanks to her, I will be able to start living again.

If you are still undiagnosed or waiting for your surgery, keep pushing, keep fighting, and keep demanding answers! You will get them. It’s unfortunate that it takes so long to get correctly diagnosed, but it will be worth it when you finally are. If you live in Tennessee and would like my doctor’s information, leave a message in the comments and I will find a way to send it to you. Also, if you could Google petitions for endometriosis funding on wh.gov and sign, that would be incredible. Luckily, I have great insurance, but if I didn’t, the surgery could have cost me $12,000, and for a lot of women, that’s a reality. Do your own research and never give up. If I hadn’t done my own research, I would most likely still be undiagnosed.