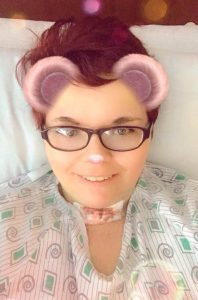 In 2018, while lying in bed I rubbed my neck and felt a golf ball-sized lump at the base of my neck: I ask my husband if he felt it and he did.
Concerned, I called my general physician and she was able to quickly get me into her office so she could examine my neck. She felt the lump as well and scheduled me for an ultrasound-guided, fine-needle aspiration; the thought of that terrified me. She told me only about five percent of modules are cancerous and not to worry yet.

I went about life until the biopsy. I had the procedure done and it wasn’t pleasant at all. Then the waiting set in; it took a week for the results to come back. My doctor called me and ask me to come into the office–my heart sank. My husband went with me to my appointment and I asked him to sit in the waiting area.

My doctor told me my biopsy came back suspicious for papillary carcinoma and at that moment my heart raced fast. She said, “It’s the good cancer, the best one to cure.” No one could prepare me for what was next. I had to have my entire thyroid removed and 11 days later I had to go back in and have a radical neck dissection to remove cancerous lymph nodes. While that procedure was being done, they discovered I had Hashimoto’s disease.  I found out the cancer didn’t just attack my thyroid, it attacked my center lymph nodes and invaded my vascular veins. I cried and cried until I couldn’t cry anymore in the arms of my husband who has been my rock and he cried with me as he held me tight.

I was sent to an oncologist to start this scary journey. The oncologist said my case was rare because normally it doesn’t spread or invade the vascular veins so that makes my case more complicated. No one told me that I’d have to go through so much at the age of thirty-five. I had to prepare for the cancer treatment which meant I had to start a two-week low iodine diet. I had to stop taking my thyroid medicine for six and a half weeks. No one told me my body would feel like it was shutting down and that my memory wouldn’t be the same and neither would I.

I had three early morning appointments for scans which were long and exhausting. I got my cancer treatment done and it made me sick for days after as if I had a severe case of the flu. I thought good–now this is behind me and it’s gone now.

At my 6-month mark, I had to go for labs and three more days of early morning scans and then to see my oncologist to discuss if the cancer treatment had worked; it didn’t, and my heart sank all over again. He told me the cancer had spread further up my neck toward my jawline, and I would need another round of treatment to try and kill it. What the treatment doesn’t kill they try to treat with medication to put the rest of the cancer to sleep; not knowing when or if it’ll wake up again for me.

No one could prepare me for what I’ve faced thus far on my journey. No one could prepare me for how much this journey would change my life in a good way. Having cancer is scary, the unknown is scary, but as a Christian, I have faith that if it’s in God’s will for me, then I will beat it. I’ve changed the way I see life since being diagnosed: I love harder, I laugh louder, and I smile more. I see the positive now and not the negative. I treat each day as a precious gift because that’s what it is to me. I cherish things more than I ever have in my life. I’ve grieved the loss of myself as well while on this journey. I’ve had many nights of crying and praying in the shower so no one could hear me. Because this type of cancer is considered the “good cancer, “it doesn’t get enough awareness brought to it.

I want to share my story with all who all take the time to read it because cancer is cancer and when you see the face of it you can relate to what an evil thing it really is. Cancer doesn’t just affect the body it chose it also affects the spouses and the family of the loved ones.
Keep fighting the good fight everyone, and never give up. I intend to always fight like a girl and beat this demon.