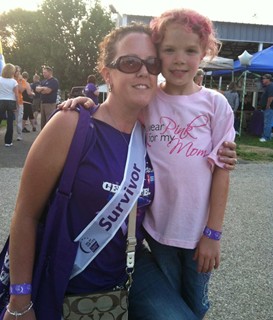 In March 2010, my OBGYN office found a small lump on my left breast. She asked me to feel it, watch it, and not to worry because I was too young, with no family history.

After waiting a few months, my husband finally convinced me to call the doctor. He could visibly see my breast concaving. I called my doctor, scheduled a mammogram, and on July 26, 2010 I was diagnosed with Stage II cancer.

I was 34 years old, married for seven years, and had a five year old and two year old. As she told me the news over the phone, I felt numb. I couldn’t register what she was saying. I could not fathom that this was happening to me. I always thought, ”I don’t need to check myself. It will never happen to me.” She made an appointment that day to see a breast surgeon.

Upon speaking with the surgeon, it was explained to us that two of the four quadrants of my left breast were affected. The lower left quadrant had a lump and the upper right quadrant had DCIS. A lumpectomy was not an option, I was going to lose my breast. It was a fairly easy decision to have a double mastectomy. Why take that chance, I did not want to hear I had cancer again; I wanted them both gone.

September 2, 2010 was my nipple sparing, bilateral mastectomy with immediate reconstruction. I had chosen the DIEP procedure for my reconstruction which entailed taking tissue from my belly (a boob job and tummy tuck all in one day = my silver lining). That was all good and said but there was a snag.  After taking 11 nodes, 3 tested positive. Reconstruction would have to wait.

When I first found out I had cancer, my biggest fear was losing my hair. I knew if the cancer had spread to the nodes, I would have to have chemo. Once I knew I had no choice, I chose to accept it and embrace it. September 27, 2010 was my first chemo treatment. I had four rounds of AC and four rounds of Taxol.

October 22, 2010 my husband lived the “for better or worse” and shaved my head, along with his. It was a relief to say the least. To my surprise, my mother-in-law also shaved her head that night and kept it shaved until mine grew back.

Chemo for me was relatively uneventful, thank God. I gained plenty of weight to prepare for my reconstruction in 2011. I went 13 months wearing prosthetics and never let them stop me from my normal activities. I can honestly say at the time, I did not miss my breasts.

February – March 2010 I went through 33 radiation treatments. I was back to work by now and made my daily trek during lunch. I could not wait until radiation was done because that meant 6 months later, I could have my reconstruction.

October 6, 2011 was the day I was very excited for, it was my silver lining to all I had gone through. I was in surgery for a total of 19 hours! I woke up with my IV running through the main artery in my neck due to my veins blowing in my right arm. Did I forget to mention I developed lymphedema in my left arm? Fortunately, we caught it early and were able to reverse the effects. I do wear a compression glove at night and a sleeve if I fly but compared to the alternative, I will take it!

I was in love with my new boobs. Although they were faceless for the time being, they were beautiful – scars and all! I felt like it was Christmas every morning. I never missed them when they were gone but I was sure glad they were back. May 6, 2013 I had my last surgery, putting a face on my boobs.

As I heal, I am awed by my plastic surgeon’s ability to create such beauty. After gaining 60+ pounds for the surgery (I wanted the girls to be plentiful) and living with prosthetics for 13 months, I was ready to feel like a woman again.

Through my journey, I have learned you will never know how strong you can be until you are faced with adversity. People commented on how positive and strong I was through everything. To me, there was no other way to be. I have a tremendous support group. I could not have kept such a positive attitude without the help of my husband, parents, family, and friends.

Oh, remember me telling you about the obgyn that said I was too young? Because of me, they now flag all patient files where abnormalities were found and follow-up with the patient to schedule further testing if need be. If this saves just one life, it was well worth fighting like a girl!