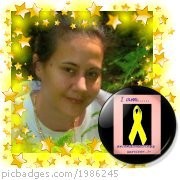 To all my friends and supporters in my fight for survival,

As you know, we have one heck of a fight ahead to get people closer to awareness and  possibly even benefits. It has been a longtime dream of mine to leave behind a legacy for those who truly love me, would be proud of me and would remember that I did all I could with what little I had left. With the help of friends and strangers to fight this battle. So that long after I am gone girls will have a chance at a life they dream of, whatever that may be.  A foundation that educates and gives hope and understanding for a disease that can cause you to lose yourself completely, dreams and all.

Before I begin this, those of you who know me know I love the outdoors and was a runner when I lived in Florida. I would ride a mountain bike almost 30 miles a day. Work, camp, hike, climb mountains, outlast most of the men in my life and was up for anything active. I was a lot of fun, with plenty of stamina, swim team in school, danced even after being sick.

Since 2000, after being told it was stage 4, which was way too late to try any treatments – not one single doctor knew anything to help me. Since then, about every six months or so I had something to deal with medically,  from surgeries, to weeks in the hospital all drugged out.  I had doctors tell me it’s all in my head or that I was a drug seeker! Well, if I am in the ER saying it hurts so bad that you gave me morphine and it still hurts, HELLO. Yet I was still treated as though I was over exaggerating and in the same breath be told its just like labor pain. It was then I knew my mental state of mind was in bad shape because of endo.

I moved back to PA late 2005, was back in the hospital hearing all the same things. Earlier that year I had spent 6 weeks in the hospital only for the Dr to finally go in laproscopically and find my left ovary wrapped around my bowels, adhered to it and in a place it shouldn’t have been. They took all that out of course. Six months later it began again. No one would listen. So now I’m started on danazol, lupron and hormones, it was ridiculous. It acted like a cancer, so they tried to treat that. They thought it may by menopause. etc. It thrived off my estrogen, so they would take it away, what a nightmare.

Summer 2006 my cousin took me once again to the hospital because I was in severe pain in the liver region up under the ribs,  I was throwing up bile and couldn’t move. Then the words that changed my life forever came out of this doctors mouth, you need to go to an ob gyn oncologist, there’s nothing we can do, it’s too far advanced, and a heartbeat later I left the room, I had to ask my cousin a few minutes later, did he just say I have cancer? I was 33 years old and had been told most of my life ”oh its not that bad” and here I sit almost outside my own body in complete shock. At the time I lived in Philly, I went home, sat in a room alone for a week, didn’t even speak to my cousin, that was the hardest thing I ever had to do, completely get my mind to understand. THIS IS REAL, there is no cure, but let me tell you how hard it is to do, almost two years later I don’t think I am really there yet.  Not only that, but it was found on the left lobe of my liver and inside the bile duct. After surgery, where my gallbladder was taken also, I had to undergo Chemo therapy along with shots of interferon. The chemo and shots went on every week for months.

In 2005, Hurricane Irene scared me right out of Florida back to the hills of Pa. During this year I lost two children in utero, a month after I lost Jayden. I met Craig, it was love at first sight, my benefits kicked in finally.I know how hard it was to get treated, I found a Dr who is head of ob/gyn at lehigh Valley, he is my angel, he listened and what he heard was the fact I was belting out. He went on ob/gyn.net and told me I am 1 out of 10 of his patients where what works for others doesn’t work for me. I under went a full hysterectomy in 07, they took the appendix out then too. They put me on estrogen, and at the time didn’t question it, but it led to my 2011 flares! They have since put me on clonodine.

So, as of today I am missing a lot of parts and I just learned that I have severe ARD. Therefore, they don’t want to go back in to cleanse anymore. I was on meds for mental strength, which I no longer take. They put me on clonodine patches to control the menopausal symptoms, but you can’t fool mother nature. I fell into a rough patch living in BFE.  Dr Patruno however was willing to learn, that’s a first! During this time I lost friends, lives, loves, and children to Endo. I lost 6 inches of bowel, uterus, ovaries, gallbladder,appendix, so many operations and getting ready for more.

In may 2011, I was rushed to the hospital again, had been throwing up bile for 7 hours, that symptom was how my flares began, ended up with an admission and heavy pain killers, was released knowing its back. After the hysterectomy I thought for sure that after two years of nothing it was gone or at the very least controlled, couldn’t have been more wrong. Came out of remission is what happened. I can’t eat, I can’t sleep, I pray for anything to make me feel better, knowing there’s nothing close to a cure. I am afraid its never getting better or easier, the hospital, the pain, the depression all take their toll on my brain. I am so scared to hear what’s next. People don’t think this is a deadly disease but I am proof it can be! My fiance knew when we met I didn’t want him to survive this too, but he never left my side. Thank god! I am not alone.

I never want any girl to grow up and not have a life she wants. I want every girl to have the chance at a happy life, a chance to have a family, a chance to see her kids grow. To know the love of a real man, to never suffer alone, and to know she is never alone. To be happy, and blessed with joy. I spend my days searching for info. Being there for total strangers on my facebook page fills my need to take action, and to know I am not alone.

This was written to be passed along to all the women, sisters and friends, and anyone who has any thoughts on how to help me build this dream. We need action now! 61,000 women this year alone will be told they have cancer that can’t be cured, only managed…….How can that be in the richest country?

Thank you for listening.