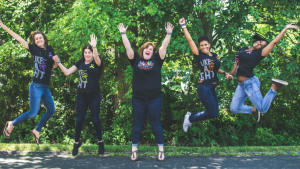 It began as a call out on social media. “Models Wanted,” the post read and from there it was on.

People of various backgrounds and from all over inquired about what it would take to be involved.

Well, what did it take?

Not much honestly, just a positive attitude, willingness to participate and availability on the shoot date.

As correspondence continued and decisions were made, five unique models would round out our team.

The Fight Like A Girl team spent hours scouting locations, sorting through looks and even picking out refreshments for the models.

We wanted the shoot to be a success and triple checked our plans to ensure that it would be.

Before we knew it, the photo shoot date had arrived.

The FLAG team transformed their office with pink table cloths, flowers and refreshments prior to the models arriving.

It seemed as though the weather was in on our plans for success as well. The sun was shining, and there wasn’t a cloud in the sky. Living in Northeast Ohio, weather is often times the sole factor in the demise of plans.

Nevertheless, we were fortunate to have the weather gods on our side.

As the models arrived, members of the team greeted them and then allowed the models time to mingle with and get to know one another.

Each model brought a unique perspective to the Fight Like A Girl brand.

The brand created by our founder, Sandy Ellis.

Prior to the ladies jumping into their first looks, Sandy gave a brief overview of the company and how it began.

Following that, the real fun began. The models were in and out of their looks, and the photos were coming out amazing.

Fight Like A Girl streamed a behind the scenes look at the photo shoot on Facebook Live, which you can watch in the player below.