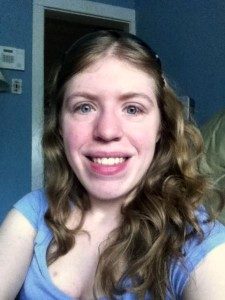 My story starts out like most others’, I would imagine. I got my first period when I was 10 years old, and at first I thought, “Yay! I’m like a woman now!”
Little did I know how much my life would be impacted by my periods.

For years, I dreaded that one week every month where I would throw up for seven days straight, not be able to get out of bed, and have a heating pad on my lower abdomen constantly. I would miss school, work, and all other kinds of activities. Not to mention having such heavy bleeding that I would have to change clothes at least once or twice every day. Over the years, I tried several different types of birth control pills. Some helped relieve it a little, but most didn’t help much.

Skip ahead to January 2015. I awoke in the middle of the night with stabbing pains in my lower abdomen. I had been experiencing a lot of shooting pain through my back and thought I possibly had a kidney stone. The pain went away after I went to the bathroom, and it stayed away for about two weeks. I thought I was doing great! Then, the pain started again. I was sent for a CT scan and discovered that I had ovarian cysts, one on each ovary. The left one was the most concerning and was larger in size. Not wanting to hesitate because I was going to lose my health insurance soon, I headed straight to my gynecologist. By now, I was in pain nearly constantly. Sometimes it was stabbing me all day. Sometimes it was just dull, but it was always there.

My gynecologist confirmed the presence of the cysts and put me back on a birth control pill. We also scheduled for a follow-up ultrasound a couple weeks later to see if the cysts changed at all. After my ultrasound, I actually felt pretty good. A few painful days here and there, but nothing out of the ordinary. Then this April, right after Easter, the pain returned tenfold. I had never been in such pain before. I called my gynecologist, and we did another ultrasound on a Friday. The cysts got bigger, but nothing else could be spotted as the cause of my extreme pain. I took the weekend to think about my options. That weekend, the pain was so excruciating, I knew something had to be done. I called the doctor Monday morning and received a call saying that I would be in surgery by the end of the week.

On April 17th, at 26 years old, I had my first laparoscopy. I didn’t know what to expect, but I instinctively knew that something else was going on besides the cysts. While I was in recovery, my doctor came to check on me and talk about how things went. I was diagnosed with endometriosis. The doctor said everything made total sense now. The pain, the worst periods ever, everything all made sense. He removed all of the endometriosis, and I am continuing with my birth control treatment and will probably only have 2-3 periods each year to try to prevent endometriosis growth in the future.

Since then, I’ve done a bunch of research, and I’m still not completely clear on my whole situation. But every girl out there should become familiar with her body. Know what works and what doesn’t work for you, and when you feel like something isn’t right, reach out to your doctors. Pursue your issue further. You know your body better than anyone else ever could!