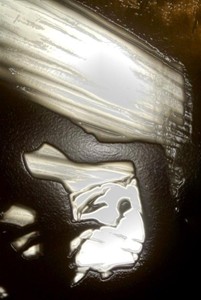 I had an incredible dream early this morning. My dreams are typically interesting, vivid and in color but on a rare occasion I’ll experience a dream that I know I’ll carry with me for the rest of my life. This particular dream was about fear. I wasn’t running from monsters, death or pain but instead I dreamt of fear as if it was an actual tangible being.

This particular dream began in black and white, and with a great sense of urgency. I was forced to leave a dear friend. I promised her that I’d return, but she was paralyzed with fear that I’d never come back. Time passed and I returned as promised. I opened the door of her home and found her slumped over in a corner with her face to the wall.

The room had become infested with fear. The walls were like catacombs and porous. Fear had embedded itself into each chamber and had grown into the walls. Each cavity contained an amoebic shaped being with a haunted face that moaned and wailed. This thing had become part of the walls it lived in and was feeding off my friend like a parasite. I grabbed my emaciated friend in one arm and then wretched each being out of its cell with my other hand. It took all the strength I had to eradicate fear. I carried my friend out of the room, out of the house and into the light. Black and white turned to color and I awoke.

Yes, I realize the woman I saved was me.

The attached artwork is my illustration of fear.

Share
Previous ”Living” with Endometriosis
Next Understanding the Other Side