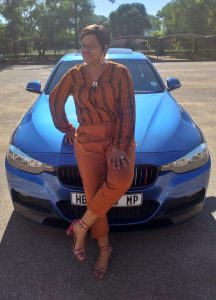 My name is Doris and I am 32 years old.  I am the mother of three boys and a wife to the most wonderful husband ever.

My story started back in early 2017 when I felt a lump in my left breast while I was removing my bra. Truly speaking, I didn’t think about it a lot. My life was normal: I just chose to forget about it.

Later that year, I felt sharp pains that would come and go from time to time. I told my husband about it and we decided to visit a doctor. We never thought it would be something serious.

It was in October 2017 when I visited a doctor who advised me to do an ultrasound scan and it picked up the lump. I was then referred to the hospital for a biopsy. I had to wait for six weeks for the results, but I was thinking that it was something that they would just treat with medication, and it would disappear.

On Jan. 4, 2018 I went back to the hospital for the results and that’s when they told me that the lump was cancerous.  From that minute my life took a very serious turn.

I’ve never thought that one day I’d be diagnosed with cancer because in my family there has never been anyone with cancer before. I was so shocked and scared. I think my husband was also scared but had to be strong just for me.

I was so confused at that time. I just wished that my mom was still alive. I needed time to just think about it. I was so scared that any time wasted meant that the cancer could be spreading. I didn’t have much information about cancer besides that it kills.

I started on by educating myself about everything about cancer, but that was not enough. I was having nightmares to a point that I was not sleeping at all at night; thinking that I will die in my sleep.

Until… I decided to use my Bible as my weapon. I wrote healing scriptures on my wall in the bedroom and my husband was so supportive. I was meditating over the healing scriptures and I started to sleep at night because I believed the promises of God, that “by His stripes” I’m healed.

I had a radical mastectomy on March 2, 2018, with three lymph nodes removed.  One was positive for cancer, but my oncologist was not happy, so I had to do a re-mastectomy in June. At that time, they removed eight lymph nodes; three of them were cancerous. I felt incomplete as a woman and wife without the breast, but my husband, the kids, and family were very supportive.

I went through six intense rounds of chemotherapy and it was hell. The hair loss, nausea, sore gums, body ache, hemorrhoids the list goes on…I can’t even wish that feeling on my worst enemy. It was not easy at all, but I had to fight especially for my kids: Rati, 10, Rebo, 7, and Rea, 4.

I held on even though it was tough. I was playing tough because I didn’t want to scare my family. I was crying when I was alone but acted strong when I was with them and I think that helped me to recover fast. My last round of chemotherapy was Nov. 25, then I started with radiation on Feb. 20, 2019.  My last fraction of radiation is on April 5, 2019, and YES, the gloves are still on, this cancer will regret ever trying its luck on me…

I’m so proud of everyone who was part of my journey: my sister, my aunt, my cousins, hubby, kids, and my church. I can’t forget my God who took me from death bed to where I am today…