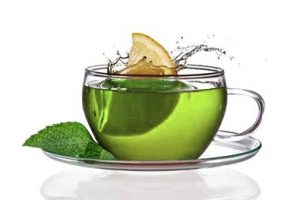 Can sipping a cup of green tea give you protection against oral cancer? It looks promising according to a study published in the journal Cancer Prevention Research. According to this new research, the polyphenols found in green tea may be a natural way to reduce the risk of oral cancer.

Green Tea and the Risk of Oral Cancer

To look at the effects of a green on the risk of oral cancer, researchers gave a group of forty-one people with precancerous leukoplakia one of three different doses of green tea extract for a period of three months. Leukoplaka is a condition where white patches form on the mouth and tongue and is a marker for a higher risk of oral cancer. The results? The participants who took the two highest doses of green tea extract showed the greatest clinical response, although all of the green tea extract users had a better response than those who took a placebo. According to what the researchers found on biopsy, the green tea extract stops angiogenesis – the process by which new blood vessels form to nourish a developing cancer. Without their blood supply cut off, cancer cells can’t replicate or spread.

Green Tea and the Risk of Oral Cancer: What Does This Mean?

It’s important not to read too much into this study since the number of participants was small. Trials involving larger numbers of people are needed to definitively say whether or not green tea reduces the risk of oral cancer or treats precancerous leukoplakia. The levels of green tea extract used in this study would be the equivalent of twenty four cups of green tea a day which is more than the average person is able to drink. If future studies show that green tea can reduce the risk of oral cancer, it’s more likely that high risk individuals would take a green tea extract supplement. Fortunately, the participants experienced few side effects with the exception of sleep problems and nervousness which were likely related to the caffeine.

Who’s at High Risk of Oral Cancer and Precancerous Leukoplakia?

The two biggest factors for precancerous leukoplakia and oral cancer are smoking and the use of chewing tobacco. The combination of smoking and tobacco use increases the risk even more. The best way to reduce the risk of oral cancer?  Give up tobacco in any form – a task that’s easier said than done for most people.

Green Tea and the Risk of Oral Cancer: The Bottom Line?

It’s too early to recommend a green tea extract to people at high risk of oral cancer, but it’s possible that even lower concentrations of green tea could offer some protection against oral cancer. So, if you’re a smoker or use chewing tobacco and haven’t kicked the habit yet, consider substituting green tea for the coffee and soft drinks you’re currently drinking. Green tea has so many health benefits that it’s a drink that most smokers can’t afford to ignore.