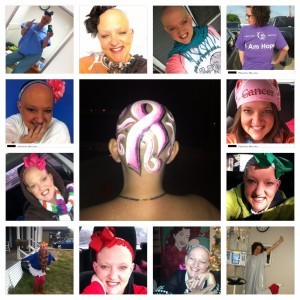 I was diagnosed with breast cancer in October 2008 after having a lump removed from my right breast. After further testing at MD Anderson Cancer center, the cancer was found in my lymph nodes, my liver, and in my uterus. When my doctor gave me the final results she told me that my cancer was so aggressive that as they were looking at it under the microscope it was multiplying and dividing as they watched.

She gave me 6 months and told me she couldn’t cure me, that either I would get tired of fighting or the chemo would quit working. I would never get to have surgery to have cancer removed. I looked at her after she said that and I told her that she COULD cure me and I would NEVER get tired of fighting! And so my fight like a girl started!!

My port was put in and by November I had my first chemo treatment! I had nine months of the “hard” chemo every Friday I was there getting my internal soldiers!! After nine months nothing was showing up on scans and my blood work was perfect. This started the the next step of my journey!! In the next year I had a bilateral mastectomy with reconstruction. I had part of my liver cut out where the tumors were, and I had a complete hysterectomy.

Since my first surgery in 2009, I have had 16 surgeries and have had maintenance herceptin every three weeks and had been cancer free almost making my five year cancer free birthday! I say almost because two weeks before that birthday in a routine appointment as I was getting my treatment it was discovered that my tumor marker was elevated. After MRI’s and a bone scan a tumor was discovered on my pelvis bone measuring a 4.9 x 2.5 x 4.9 cm. After the PET scan they found there were two tumors in my liver, two new lymph nodes under each breast, and a tumor on my thyroid. After having a thyroid biopsy and a bone biopsy the results showed a benign tumor on thyroid and on my pelvis bone. But I was positive for her2 positive metastatic breast cancer. It had come back!!!

I had 16 radiation treatment to stop the pain then immediately started the “hard” chemo again! ROUND TWO of fight like a girl!! At the start and after radiation my tumor marker was a 97, after the first round it dropped to a 54, after the second round it dropped to a 33, after the third round it dropped to a 22, and after the forth round and for the first time to retest my tumor marker was at a 14. The tumors in my liver aren’t showing up on the scan and neither are the tumors in my lymph nodes and the tumor in my pelvis is shrinking!! Fight like a girl!!! You better believe it!! With a smile!!! With grace and with all out confidence that I will kick cancer in its “arse” not once, but twice!!! I will have that N.E.D at the end of my stage 4 breast cancer again!