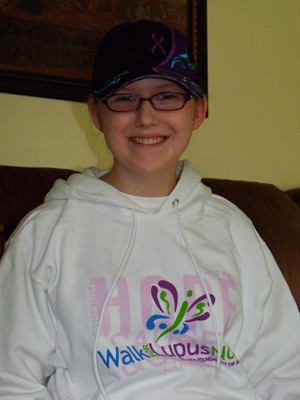 I have always had what were thought of as minor health issues. I have always had aches and pains and they were always thought to be ‘growing pains’ or something along those lines. At about 13, I started to notice a change in my toes. They started to feel numb and I could see that they looked drained of color. It was a little uncomfortable but I tried to ignore it. After awhile though they started turning purple and would be so cold. I would walk around on my ‘tippy toes’ trying to get feeling back in them. I didn’t know what was going on and it seemed to be getting worse.

I went to see my pediatrician who told me I had Raynaud’s and that I just needed to keep myself warm and that would make things better. I started to dressing in warmer clothing all the time and it wasn’t getting better. It started to creep into my fingers and after many months it was so bad that I went back to my doctor to ask if there was anything else I could do. He noticed what I thought was a ‘weird hole’ on the tips of my fingers.   He said he wanted me to see a rheumatologist at the Children’s Hospital. I wasn’t really that concerned because I had no idea that there were diseases associated with Raynaud’s.

I had to wait months for my appointment and the closer it got I decided to look on the internet and found that there were many diseases that were associated with Raynaud’s. I started to get scared. I came home from school one day and told my mom what I had found out online.  We  both said that many of these diseases I researched had symptoms that I had for years, but I didn’t realize they could be symptoms of any disease I may have. I actually said to my mom the day before my appointment ‘Mom, I don’t want it to be lupus. That sounds like a bad one’. As strange as this may be, my mom got a call from the Lupus Foundation asking if we had any clothes they could pick up. She said that it must have just been one of those weird signs that life sends us sometimes.
A month after my first rheumatologist appointment, I called to get the blood results. I knew that there must have been something  wrong when they said  we shouldn’t really talk about this over the phone  and that the doctor wanted to see  me. I they got me an appointment within a few days. They told me that I had a lot of abnormal test results,  they thought I had lupus. I didn’t know what to think, I had read horror stories online before even going in. Organ failure, short life span, death. I had just turned 16. Based on all the symptoms I told her were going on  with me, they sent me for more tests, including a chest x-ray.

Then, my doctor started talking about how I shouldn’t get pregnant and if I did I would have to plan for it. I was only 16. I felt so overwhelmed.  The memory that stands out the most from that day, is trying not to cry while texting my boyfriend of the time about how I might not be able to have kids, while sitting in a waiting room at the hospital. Of everything she said that was the most devastating. I have 6 brothers and sisters, and I always imagined having the same big family for myself.

She put me on Norvasc and Plaquenil and told me to start taking a baby aspirin every day. I was the type of person who usually didn’t even take a pill for a headache, and suddenly I was taking 5 pills everyday. I was told to make an appointment for a few months away, unless anything happened between then and my next appointment.All the sudden I started swelling and actually having pain in my joints, especially in my hands. She put me on Prednisone. I felt like other than being really tired with occasional pain I had been mostly fine and suddenly I was falling apart within a matter of 6-8 months. I couldn’t go to the pool that summer, and when I did I couldn’t stay in the pool because no matter how nice it felt to everyone else, it was always too cold for my fingers and toes.

I was up and down for awhile and then seemingly out of nowhere I started getting really sick at the end of my senior year. I kept complaining about how badly my feet hurt. They were so swollen I could barely wear any of my shoes, and none of them were comfortable. I went in to see my doctor and had several blood tests run over the course of a few weeks. She had started me on Prednisone again, 30mg. She told me to come back in a week and we would see how I was doing. I was just getting worse and was getting no relief. She accused me of not taking the Prednisone (I had not taken my medications in the past) and I was so upset ,but  my moms support convinced her I had been taking the medicine. They eventually realized I wasn’t metabolizing the Prednisone and had to switch me to Medrol.

By this time I had gotten pretty sick. The vasculitis in my legs had made it almost impossible to walk. I was miserable. They had me on a high dose of oral steroids and then it was decided I needed a three day round of IV steroids to try to get things under control. I had a really bad reaction though it seemed like every possible side effect hit me. I was almost more miserable then, than I had been previously. They kept saying my blood work was looking better, but I didn’t feel better at all. It took weeks to get to the point that I could walk again and make it to school. I feel like I missed out on so much of the end of my senior year. It is filled with bad memories, not happy ones.

I have been diagnosed with Lupus, Vasculitis, Myositis, GERD, Interstial Lung Disease, Raynauds, Sjogrens, and fibromyalgia. I am 19 years old now, and I will be starting my third year of college as a pre-med student. It has been a very difficult journey, but I have come through it. I want others to know that no matter what happens there is always a way to over come the obstacles life often throws at us.