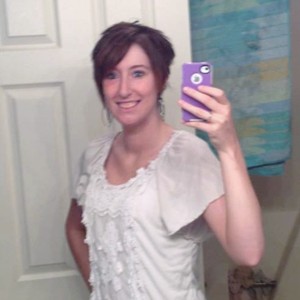 Hello, my name is Brie. My fight like a girl story began in 2008. I had just graduated high school and was fixing to start my first year of college in the next couple of weeks. I had noticed that I was starting to have pain on my right side but I didn’t think anything about it. I was young and wanted to enjoy my life to the fullest. Little did I know that one morning in August of 2008 I would wake up screaming, I was in so much pain! My mother rushed home to take me to the doctor. Everyone was saying it was appendicitis (which now I often wish it was), but after many blood test, CT scans, and a colonoscopy they discovered I had Crohn’s disease. After being diagnosed I did really well with my maintenance medication called Pentasa.

I married in June of 2009, and in February of 2010 we found out we were expecting! I couldn’t have been any happier. I have always wanted to be a mother. Bryleigh Lynne was born in September 2010. My Crohn’s was in a remission point at this time due to my pregnancy. I praise the Lord for that also! By summer 2011 things were beginning to change. I had started having problems and tried getting in to see my GI doctor. All he wanted to do was prescribe me stuff to get me out of his way, after multiple times of being admitted into the hospital and multiple times of being told they didn’t know what to do. I lived in constant pain. In the summer of 2012 I was finally tired of being screwed around and found a new GI doctor. She is AMAZING! By the time she got me as a patient my Crohn’s had gotten WAY out of control. I had lost 70 lbs and looked like I was going to wither away.

In December of 2012, I received my first surgery ever; a small bowel resection with a temp ileostomy. At this point I couldn’t have been happier that I was about to have a surgery to get my life back, but it wasn’t that simple. I battled an abusive relationship with my husband. He never supported me in my time of need. I was “ruining his life.” He had kicked me out of our home if I was going to have my surgery. My daughter and I moved back in with my parents and stayed with them. My mother is the one that had to take me three hours away up to Vanderbilt so I could have my surgery. Once I woke up my husband was there. He promised things would change and he would get some help (I could smack myself for being so stupid, but you live and learn). My surgery was the best thing I could have ever done for my health except for a stent they left in my left kidney, so it wouldn’t collapse.

In February I thought things were going great until an abscess popped up on top of my skin. The next day I saw a surgeon and that same day (Valentine’s Day) he sent me into surgery. They had to take and cut me open to remove all the infection. The infection had tunneled down 4 cm. For one month I had to wear a wound-vac to help this spot heal. I was now to the point in life that I had been through hell but I wasn’t going to let it get me down. During all this time my husband started his stuff again. He would say, “I did this to myself,” and “I can help it,” and the list goes on. By June of this year on our fourth anniversary as a matter of fact, and I had had enough. I packed my stuff and left. Since then I am a much happier person, I have less stress, and I haven’t had to battle anything Crohn’s disease related in awhile! I never want anyone to feel sorry for the things I have been through. They define me as the person I am today! Today, I live for myself and my daughter. I praise the Lord for blessing me and helping me get through the tough times! Never give up! Fight like a girl!