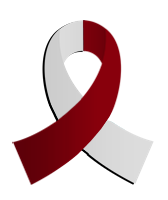 I’ll be 34 next week. I met my partner and children’s dad when I was sixteen. We had 2 children together, and after a 10 year gap I found out I was pregnant, very unexpectedly, with our 3rd child.

On Boxing Day, December 2008, my partner Kyle was suffering from severe head pain just under his eyebrows. The pain got so severe he asked me to take him to our local hospital 10 minutes away. After being examined, the hospital decided it was probably Sinusitis, and if it didn’t get any better to visit his GP after the holiday season. The pain didn’t get any better. In fact, it got worse. I pleaded for Kyle to go to the doctor’s for months, but he kept palming me off, saying it was alright and it feels a bit better today. I knew it didn’t. Eventually in July 2009, 7 months later, he couldn’t cope any longer with the pain. He saw his GP and had to be urgently referred to an eye specialist at a hospital around 20 miles away from us. By this time, his eye was constantly watering, causing him a lot of pain and blurred vision. I was 36 weeks pregnant and drove us to the appointment. The specialist confirmed our fears. He would need to do a biopsy as soon as possible but was pretty sure it was cancer. A week later the biopsy took place, and they were right. They scheduled Kyle to undergo intense chemotherapy, booked for the following week. I was almost full term but knew I’d go overdue with my labour from past events with my other children. I spoke to my midwife and asked to be induced. They agreed and admitted me to my local hospital. After almost a week of worry and uncertainty, I was finally in proper labour.

I thought the stress and worry of what was going on with Kyle would have started my labour off early, but not in the slightest. The labour was very long and complicated. I had to be cut as the baby was trapped in a vaginal lip. I almost got rushed to theatre for a Caesarian section, but as luck had it, about two seconds before they were due to take me, I felt the sudden urge to push. It was around 2 in the morning when I finished the last stage of labour. Kyle came down to see me and the baby. He couldn’t stay too long though, as he had to be up early to get to Velindre for the start of his treatment. He was told he would be staying in there for a week for his first dose. Next morning I woke up, looked at my newborn baby and visualised in my mind the empty house I was going home to. The hospital said we were fine to leave, so I got in my car with my newborn and drove myself home to my lonely house.

That week I travelled the all-around 80 mile trip to Velindre and back every day to see Kyle. The week of treatment was finished. Kyle was allowed home for a few weeks. It was really scary as he was in so much pain most of the time that I was constantly ringing the doctor’s. This process continued for a few months, back and forth to Velindre and ringing Velindre when Kyle was ill, or ringing the GP for him. After the last chemo, the doctors at Velindre decided to start Kyle’s radiotherapy to try to shrink the tumour enough to allow surgery to become an option. The radiotherapy was demanding. Six weeks of radio treatments every single day except weekends, along with Kyle being ill. The 80 mile round trip there and back every day was exhausting. Kyle got very ill with the radiotherapy, recurring thrush in the mouth and severe sore throat, so sore that it came to the stage where he was unable to swallow. He then had to have a P.E.G feeding tube fitted with a pipe that went straight to the stomach. At night he would have a pump, and I would have to set the rate and flow up. This had a bottle attached to it that pumped food at a very very slow rate through a giving cassette, then into Kyle’s stomach. It was a nutrition supplement with the RDA vitamins, minerals, iron, fat, etc. to make sure Kyle was getting the nutrients he needed to keep him strong throughout his treatment.

In November 2009, oncologists had decided the tumour had shrunk from the size of a tennis ball to the size of a golf ball, and they were satisfied that they could operate. The only problem was there wasn’t a surgeon that had done an operation like this before locally, so we had to travel to London and stay there for a week, as one of the top five surgeons in the country had agreed to operate on Kyle at Charring Cross Hospital. In between all this, Kyle was still in and out of hospital being ill from treatments, back and forth for clinic visits, and I still had my everyday chores to do like taking the kids to and from school and after-school rugby for my eldest son, cleaning, cooking, washing, shopping, and looking after a newborn. I was offered carers to help, but Kyle was having none of it. He didn’t want strangers sitting with him.

December 9th 2010 was the worst day of my life. Kyle was in hospital at Velindre. He had been ill again from the radiotherapy, and they thought he may have caught a chest infection. He’d been in about a fortnight, but I visited with the children every day.

I got the baby fed and went back to bed. For some reason I was sooo tired on this day. I put my phone on silent and crawled back into bed with my baby. When I woke up, I had six missed calls on my phone. Two were mobile numbers. The other four were my father’s home phone number. I phoned my dad’s house phone. My brother answered, sounding very shaken. He didn’t have to tell me. I knew straight away. “Bon,” he said, “I think you better come to dad’s.”

“Oh no please don’t say it. Don’t say what I think you’re gonna say. He’s dead isn’t he?” I screamed.

I remember screaming, “No, no, no.” My dad brought me up from the age of 12. He was more than a dad, he was the best dad in the world, my mum, my best friend, my shoulder to cry on and my hero. He was a fit, healthy man who ate very little red meat and always took vitamins, so this was totally unexpected. I told my dad everything! We were so close.

The autopsy revealed that he had coronary heart disease, which he’d probably had for years. He had a major heart attack that morning which killed him.

I felt empty, gutted like a fish. I just couldn’t take it in, and the worst part was not being able to say goodbye. I was heartbroken. And I had the grieving process to go through alone. Kyle was still in Velindre. In fact he stayed in hospital until Christmas Eve, so I also had to get through my dad’s funeral on my own.

January 2011 came. We were off to London for Kyle’s surgery, but all I could think of was my dad. I didn’t want to go to London but had to. The surgery went well. The surgeon was pleased but informed the doctors back home that he wanted a close eye kept on Kyle, especially the lymph nodes in his neck. We were back home within 4 days post surgery, but there were more scans and tests to be done at clinic and more unplanned hospital visits with Kyle being ill. He was very weak and unstable on his feet from treatments. I had to wash and bathe him, etc.

After a few weeks, Kyle got a dark red spot/lump on the side of his neck. Another biopsy was carried out. I was fearing the worst. The cancer was back! Kyle was too weak to have anymore treatments. The doctors got him booked in as soon as possible, and surgery was scheduled for the following week.

The day of surgery came. I rang the hospital about 20 times that day to see if he was back from theatre. He was in there hours and hours. I went to see him the next day. He looked like something out of a horror film with tubes and pipes coming out of him, drips, catheter, and staples in his neck. It was awful. He’d had a neck dissection to take away the cancerous tissue in the neck. They took a piece of skin and tissue from his chest, took away the cancerous tissue from the neck, then replaced it with a flap of healthy skin and tissue from the chest. Kyle stayed in hospital for a few weeks after his operation. The day he was allowed to go home, his oncologist wanted to see us before we left. He sat us down and told us that when they operated on Kyle’s neck they had taken most of the cancer away, but it had spread to the main artery in the neck. There was nothing more they could do .

Kyle passed away at home on the 15th of June 2011. I was with him when he passed, and also present were the St. David’s nurses.