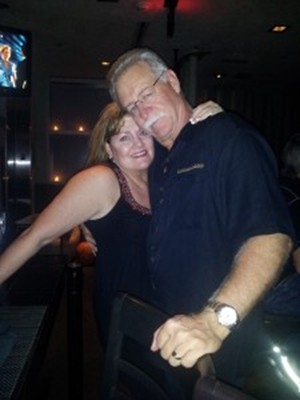 My life was going great, I had just been promoted to Sergeant on the Phoenix Police Dept. I was assigned the midnight shift. One morning as I was going to bed, I noticed that my left nipple was leaking. I knew that couldn’t be normal so I waited until the doctor’s office opened and scheduled an appointed and may already been over due for a mammogram. I was 36 years old and single. This was 1996.

I started getting annual mammograms at age 27, the year my mom was diagnosed. I had to fight with my insurance company every year, but in the end I won. The doctor (female) showed me my scan and pointed out a small cluster of calcification. She said this could be indicative of breast cancer but that it was so small she would not even recommend a biopsy. I looked her in the eye and said, “well then we will show it to a doctor who will.” The biopsy showed ductal carcinoma in situ. I had two lumpectomies and radiation.

Three years later, I was happily living with my boyfriend. I went for my biannual mammogram and was devastated to find out that the cancer had spread outside the milk ducts and was now invasive to my entire left breast. I had a bilateral mastectomy because I didn’t want to ever go through this again. This time there was lymph node involvement so I had to go through six months of chemotherapy.

I told my boyfriend that I would leave and take care of myself because this might be too much for him to handle. He insisted that I stay with him and he would take care of me. He went to every doctor appointment and every chemo appointment with me. Toward the end of my treatment, my boyfriend proposed marriage while I was flat from the mastectomy and bald from chemotherapy! I knew then how much he really loved me! We were married in 2001.

Fast forward to 2012. All was good and cancer was gone for nearly 12 years. I felt a lump at the top of my left breast close to my under arm. I had several doctors look at it including my oncologist, my plastic surgeon, and my family doctor. They all concluded that it was scar tissue from my multiple attempts at reconstruction. After about 10 months of asking doctors about this lump that I was completely worried about, I convinced my Oncologist to take a biopsy. Yes, it was a third occurrence of invasive breast cancer with lymph node involvement.

I had to go through another round of chemotherapy, stronger than the first one, and six weeks of radiation. For four weeks I had to go to radiation twice a day! I also had to take Herceptin for one year. I finished all of my treatment one month ago and I am feeling good, I just get tired easily! But I just celebrated my 12 year wedding anniversary with the most wonderful, caring man in the world. I’m so glad he didn’t take me up on my offer to move out twelve years ago. He says he loves me now more than ever!

When doctors say you should wait until you are 40 before you get a mammogram, I say to pay attention to your body and report anything suspicious. If it runs in your family, start mammograms right away, now matter what your age. And don’t ever be afraid to disagree with your doctor. Get a second opinion if your body tells you something and the doctor dismisses your problem or just doesn’t see anything.

My follow up is in three months. But I’m not worried. Okay maybe a little!