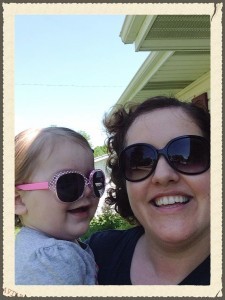 My story began in September of 2012. I was 30 weeks pregnant with my daughter Avery.

While getting ready for work one morning I noticed I was bleeding. I had some bleeding earlier in my pregnancy so I was a little nervous but they could never find anything wrong before so I figured everything would be okay. I went in to get checked and they found a polyp. The doctor removed it and said they would test it but it looked pretty normal. I was a little nervous but they seemed confident that it was nothing so I moved on with my day. As long as my baby was okay that was the most important to me.

The next afternoon I was at work when I got a call from the doctor. He told me that I had large cell Neuroendocrine carcinoma of the cervix. He told me that I had an appointment on Tuesday to see the OB/gynecologist. Since they got the results late on a Friday he didn’t have a lot of info for me. He did tell me that I would be having my daughter in two weeks by c-section and and I would start chemo two weeks after she was born.

He also told me I would have a total hysterectomy. I was devastated to say the least. I was so frustrated that I would not be able to have more children. My son was stillborn the previous September. I actually found out I had cancer two days before what would have been his first birthday. After we saw the ob/gynecologist we decided to have a CT scan before I had my daughter. I was told that the cancer I had was very aggressive and that it could spread to my lungs and GI tract.

After my CT I met with the ob/gynecologist, my ob, a perinatologist, a NICU doctor, and an oncologist. It was a long day of appointments. The plan stayed the same, I was to have my daughter when I was 32 weeks. Luckily my CT went well and the cancer hadn’t spread. So the next two weeks went fast preparing for my daughter and chemo. I went in on October 16, 2012 and at 8:27 a.m. our daughter Avery Lee was born. I did get to see her face and hear her cry before I was put under for my hysterectomy. Once I was out of surgery I was wheeled in my hospital bed to the NICU to see Avery. We were able to hold her hands while she was in the incubator. She has been quite the hand holder ever since. Luckily she was 5 pounds 4 ounces at 32 weeks so she only spent three weeks in the NICU. I started chemo as promised two weeks after Avery was born. After four rounds of chemo and a hysterectomy I am happy to say I have been cancer free since February of 2013! I truly believe if it wasn’t for both of my children I wouldn’t have caught my cancer so early. I am also very grateful to the doctor that decided to do an exam that day.