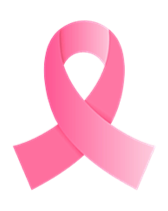 The golf ball sized lump in my left breast appeared seemingly overnight. My PCP had done a breast exam at a checkup a few months prior. It was not there then, or at least we couldn’t feel it.

I told myself, it appeared so fast, it had to be a cyst. Going in for my mammogram that same day, I wasn’t even nervous. I was only 39 years old and there was no history of breast cancer in my family, so I was convinced it was nothing. After the mammogram, the radiologist suggested an ultrasound just to be safe. I was a little concerned then, but not scared. It’s a cyst. I’m sure. After the ultrasound, the tech left me alone in the room waiting for the radiologist and the image was up on the screen. I could see the mass and the fingers protruding into surrounding tissue. That’s when I became concerned. Cysts don’t have fingers….

The radiologist said  he highly doubted that was a cyst, but it could be a benign growth and that we would do a biopsy. My concern turned into nervousness. After the biopsy was done, I asked the doctor, “What do you think?” He was reluctant to say. I told him I wouldn’t hold him to his answer, but I know he had been doing this a long time. He knew what cancer looks like. He looked at me sadly and said, “it doesn’t look good”.

My first thought was NOT my biological son. It was my step children. Their mother was diagnosed with an aggressive leukemia earlier that year and her battle was going badly. This wasn’t fair. They had been through enough already. Then my son. He is 15 -old enough to suffer the loss, but too young to take care of himself. I had to shake myself out of that. I’m getting too far ahead. It may be very early. I may not need more than a lumpectomy. Don’t….panic….

I called my mom to tell her, and that’s when I became scared. “No, mom I don’t know what stage yet. No we don’t know if it has spread. I’ll tell you when I know more. I just don’t want to have to do chemo. Chemo scares me more than the cancer,” I explained.

Fast forward through tests and doctors appointments. My oncologist told me, it was stage 3 and explained, “it’s in your lymph nodes on the left side. It hasn’t spread anywhere else. We will start with chemo, then a mastectomy, then radiation.” I never had such an even mix of dread, fear and relief at the same time.

Fast forward again to chemo treatments. I was exhausted, bald, and had a constant case of thrush. To top it off, we were in the middle of a pandemic. No one could come see me at home. No one was allowed in the infusion room to keep me company during treatment. My support group that brought me medications and food had to drop it off at my door. I was high risk, and I was alone. Only I wasn’t. Phone calls from my support group were regular. The Facebook page I created to keep family up to date is 120+ strong and full of constant encouragement. My son was helping as much as he could around the house, and my biggest angel, my dog, never left my side. He would lay his muzzle on my leg while I cried because the thrush had gotten so bad that I couldn’t swallow. He cuddled me and kept me warm when I had chills and bone pain from the shots that boosted my white blood cell count. He kept me moving because no matter how sick I felt, he still had to eat, go outside, and wanted to play.

The last day of chemo was a small celebration. One month later I had my mastectomy and lymph node removal. My mom came all the way from Texas to help after my surgery. Surgery day was another test of having cancer during Covid-19. My mom dropped me off at the front door of the hospital. She could not come in. She couldn’t sit in the waiting room. She could only wait for hours and worry awaiting a phone call that I was okay. I could feel her pain as I get out of the car. She was worried and scared and angry that she can’t come with me. I understood that, I’m a mom too.

Surgery went well and my mom was amazing while I was recovering. I’m happy with the results of my reconstruction and the pain is bearable. My incisions are slow to heal due to the chemo. The drains are annoying but not painful. I just want this to be over. However, at this point I am “cancer free”. I was put on anti-hormone drugs. I cried all of the time. I balanced on the edge of suicide. My depression was out of control. The oncologist and I agreed the drugs were dangerous to my state of mind, so we stopped them. I elected not to do radiation. I was done. I fought my fight and I won.