Home / Articles / Health and Wellness / Whole-Grain Popcorn: Is It As Healthy As Vegetables?!

Whole-Grain Popcorn: Is It As Healthy As Vegetables?! 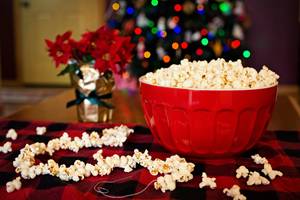 Most people don’t think of popcorn as a health food. Imagining this salty treat may conjure up the of hot popcorn movie theater style – freshly popped corn in a cardboard cup doused with artificial butter and packing over a thousand calories. There’s certainly nothing healthy about this picture. Surprisingly though, popcorn and health may not be mutually exclusive – at least according to a recent study presented at the meeting of the American Chemical Society. It turns out that popcorn and other whole grain snacks may pack as much nutritional punch as some fruits and vegetables.

Popcorn and Health: A Study

A study carried out by the University of Scranton showed that whole grain snack foods such as popcorn have surprisingly high levels of antioxidants, particularly polyphenols. Although whole grain popcorn made the top of the list of high antioxidant snacks, other popular whole grain snacks such as whole grain crackers and cereals were also high in antioxidants. It appears that the antioxidant power of these foods survives even the heat used to bake or cook them, although heating for prolonged periods of times seems to reduce antioxidant levels.

Popcorn: As Much Antioxidant Power as Fruits and Vegetables

Better Than Fruits and Vegetables?

Image by Adriano Gadini from Pixabay