Home / Articles / Get Informed / What to Expect: Colectomy

What to Expect: Colectomy

fightlikeagirl_sm Get Informed, What to Expect Leave a comment 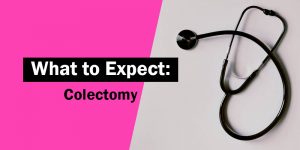 The week of Thanksgiving in 2018, I was diagnosed with colon cancer which was found through a colonoscopy. The day that I found out, I was given an appointment for the following Monday with the surgeon. However, I was in such awful pain that I did not feel that I could even make it until that day. The doctor performing the colonoscopy told me that if the pain was too much to bear then I was to go to the emergency room of the hospital that the surgeon worked at. I was told that she was one of the best surgeons in the country for this surgery.

Needless to say, I only made it 2 days before I was toppled over on the floor in horrific pain. My husband immediately took me to the emergency room. After many tests and a ton of pain medication, I was scheduled for surgery 2 days later. I was fortunate this surgeon had a team of doctors who were at the hospital 24 hours a day so I was able to meet with someone who actually would be part of the team.

After spending about 8 hours in the ER, I was taken to a hospital room where I would stay until surgery. I was able to get IV pain medication during this time. The surgical team came in multiple times a day, going over what I needed to know for surgery. My husband was allowed to stay with me 24/7. He never left the entire stay. They had a sleeping chair that they put in my room.

The day before surgery, a man came into my room to prep me for the colostomy bag that I was told I would need temporarily after surgery. I was told that this would allow my colon to heal after surgery. After about 4 months, I would be able to come in for an additional surgery where they would essentially reconnect everything so that I would not need the colostomy bag. He went over how to care for it as well as making small tattoo marks for the correct placement of the colostomy bag to help the surgeon during surgery. I was on a liquid diet the entire time that I was in the hospital.

On the day of surgery, I met with the surgeon for the first time. She explained the surgery to me. She would be making a large incision in my abdomen, removing the tumor, and essentially removing part of my sigmoid colon. She would not know how much would need to be removed until she was in surgery. She would connect my colon to the colostomy bag, and hopefully in a few months I would have another surgery to reconnect everything. They would also place a catheter prior to surgery.

After the surgeon spoke to me, a man came to take me to surgery. The anesthesiologist came into the hall outside of the operating room and went over how I would be put to sleep. I would be given IV medication that would make me sleep. As soon as I was asleep and on the operating table, a breathing tube would be placed down my throat. The last thing I remember was a doctor injecting a medication into my IV.

When I woke up, I was in a recovery area where I had my own nurse. As soon as I awoke, she came over and asked about my pain level. I was in terrible pain, so she was able to give me IV pain medication. A few minutes later, she brought my husband and my parents back to see me. My husband later told me that I had been out of surgery for over 4 hours before they called him back. When my husband came back, he whispered in my ear that I did not have a colostomy bag that they were able to immediately reattach my colon which I am forever grateful for. I spent another 3 hours in recovery before I was taken to a room. I was not given any solid food, but I was given liquids to drink.

I spent the next 3 days in the hospital. My surgeon’s team came in several times a day to ensure that I was recovering properly. I was able to get up and walk the following day when the catheter was removed. I had the IV connected until about an hour before I was discharged. I had to get up and use the bathroom nearly every hour because they were trying to run a ton of fluids through my IV to get my digestive system working. I was told that until I passed gas that I was not allowed to leave the hospital. I was given food to eat, but things like chicken noodle soup, pudding, and mashed potatoes. The entire time I felt like I had to have a bowel movement, but I was unable to do so.

Five days after coming in, I was scheduled to go home. I was instructed as to how to take care of the incision in my abdomen, and when my return visits would be for the surgeon. At that time, I was told that I should just keep to soft foods and use liquid nutrition to supplement until I was able to eat protein again.

When I arrived home, I was only able to get any level of comfort in bed with propped pillows. I was lucky that our bathroom was steps away. For the first few days, I needed help even getting out of bed. I was not allowed to shower for several days. I was not able to eat much, so I used liquid nutrition. I found that ice packs were essential to help ease the pain and was given oral pain medication. I set my phone alarm to make sure that I took them on schedule.

A week later, I went to see the surgeon for a return visit. She gave me more detailed information about my surgery and my pathology reports. I was told that I had a complete blockage of my colon and that I would require chemotherapy. I was scheduled to see an oncologist in 6 weeks. She explained that I needed time to recover before I could start chemotherapy. She felt as if she had removed all of the cancer. She checked my incision and scheduled me for another appointment a month later.

I was told that I could go back to work within 8 weeks, but I was unable to work for 6 months. I could not sit without pain in a chair or car for any length of time. I began senior exercise classes daily to regain my strength. I began this about 2 months after surgery.

Three years later, I still have many issues with food. I am not able to eat anything fibrous. The only meat that I can eat is chicken and ground beef. I cannot eat salad or any vegetable that you would typically eat on a salad and can only eat white bread. I essentially eat the same things each and every day. I have been to see a nutritionist and she basically said to deal with it and try to figure out what foods my body can tolerate. I do wish that I had been told about this prior to surgery. It was never mentioned.