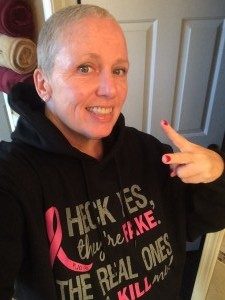 I went for a yearly mammogram in April 2015 at the Air Force Hospital and was called back for spot compression. I was working nights as an RN and went for additional views on a Monday morning after working the past 3 nights. I expected a quick picture, and then I would be home to bed. Nope, not my luck.

Additional views led to an ultrasound in May 2015, followed by the radiologist coming in to do his own ultrasound. As soon as I saw him and could tell they were measuring and really focused on something, I knew this was anything but routine. He explained that he saw something and wanted to do a biopsy. He was confident it was a lymph node. We scheduled for the following Monday. He did the ultrasound guided biopsy (it was not palpable), which was not painful. He was so kind and gentle. He said I should have results by Thursday.

By Monday, when I had not heard, my heart sank. Well, my heart really sank the day of the first ultrasound. I was just keeping a positive face. Tuesday evening when he called and asked if my husband was there and said that I may want to put him on speaker, my worst thoughts were confirmed. He told us, “It is a cancer.” I was diagnosed with IDC.

I could not believe what I was hearing. How was this happening? I was 48, felt great, had graduated in October 2014 and had finally become an RN after passing boards. I felt bad for him telling me, how hard that has to be for a physician. My husband and I cried and then knew we were gonna kick ass. On June 3rd, I had a lumpectomy with a sentinel node biopsy. I had the 4 injections around my nipple in nuclear medicine before going to the OR, which is the most BARBARIC procedure I have ever experienced. Surgery showed that the sentinel node was POSITIVE for cancer. I then went off base and met with a new surgeon and the medical oncologist. I was STAGE IIA, ER +, Sentinel Node +, Oncotype score 29. I had a power port placed and started chemotherapy July 7. I was having 6 treatments of Taxotere and Cytoxan every 3 weeks and getting a Neulasta injection after each treatment. I had my head shaved on July 11 (our 6th wedding anniversary) with my husband Phil right by my side. I wore a beautiful wig after, and we went down to the Las Vegas Strip and had an amazing dinner.

I felt pretty good throughout treatment until September, when I came down with a cough and fever. I ended up hospitalized with septic shock and a 106-degree temperature. Wow, I thought I was going to die. I have never been so scared and sick in my life. I had my last chemo on October 21, followed by a bilateral mastectomy with expander placement on November 20. Surgery was better than I expected, and my husband took the best care of me. I started Tamoxifen in December, and here I am now on January 6, 2016, feeling great, hair coming in, and starting 33 radiation treatments next week. I have been expanded a few times and mapped for radiation. I am going to survive. I was not sure of that in the beginning. That phone call changed our lives, and now that I am starting my “after cancer life,” I am so grateful for the amazing medical/surgical team I had and continue to have, all of whom I can never thank enough. I’m thankful to my husband, family friends, and all my new “PINKY SISTERS” who are all in this club with me–the one none of us ever wanted to join. I am starting 2016 with a new outlook, smiling and optimistic for the future. We can do it together. Be strong for one another. Tell your story. You are not alone. KICK IT, GIRLS. You got this.