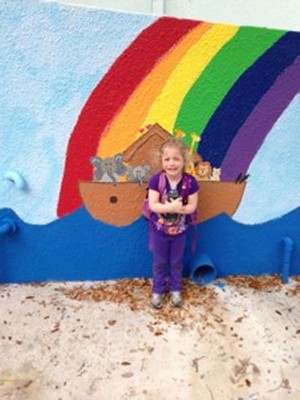 Stephanie is a five and a half year old beautiful young lady. She was born with a chromosomal defect that affects only women. She has a condition called Turner Syndrome, she has a mosaic case of it. Turner syndrome is also known as 45, XO which is when girls are born missing their second X chromosome.

Stephanie has been through a lot in her life already and has a lot more struggles to get through. When Stephanie was nine weeks old she had to have surgery for a condition called pyloric stenosis, which tends to mostly affect boys but a lot of girls get it too. It took a while for the doctors to figure out what was wrong with her thinking that she just had GERD. It wasn’t until she was almost dying that a younger doctor sent her to the ER for testing that it was discovered. She was scheduled for surgery once they got her stabilized.

Stephanie has suffered with Sandifer syndrome, minor hearing loss, and had tubes put in both of her ears. She has sensory integration disorder, generalized anxiety disorder, and she is watched by a cardiologist on a regular basis because girls who have Turner syndrome have a higher chance of developing aortic dissection. Two of the biggest issues with Turner syndrome is the girls will stop growing and they will not be able to reproduce since they do not have female hormones. In order to help them grow and develop into beautiful young ladies, all Turner syndrome girls will go on growth hormones once they start showing a decline in their growth or have stopped growing.

Stephanie was started on growth hormones which she takes as a shot every night just before she turned two years old because she had started falling off the chart. She had always been on the very low end of the growth chart but when they started her on the hormones she was below the five percent level for growth. Due to the growth hormones Stephanie suffers from severe growth pains and will wake up screaming at night in pain. Once Stephanie is finished growing and the doctors feel she is ready to move onto the next level of development, she will start female hormone treatment so that she can develop like any other girl would even though she is sterile and will never be able to have her own children unless she uses a donor egg. She will have to take the female hormone shots every day once they are started. Stephanie knows that she had health issues but because we want her to have fun and be a normal child we have not let her health issues bring her down. We have taught her to be strong and always believe in herself.