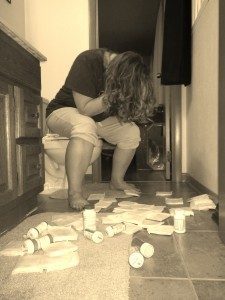 I feel a little guilty sharing my story because I have read about so many others who have been struggling their entire lives. I almost made it to 41 before my life was affected by Endometriosis. Everything up until then was fine, no health problems. Then one day, I woke up, and life as I knew it was changed forever.

When it all began, I wasn’t even menstruating. I started having stomach problems. I was bloated, with pain and symptoms of IBS. I started walking with a limp. I had terrible pain all the way down to my foot. I thought it was something I was eating. I thought maybe I was experiencing food allergies. I went from doctor to doctor and had test after test. Eventually I started peeing blood.

Then the periods began. I had heavy bleeding like I had never had before. Because I had been documenting my symptoms, a pattern developed. It wasn’t what I was eating, but when I was eating it. The attacks were happening the last week of the month through the first week of the month. Eventually, I demanded a tubal ligation (for birth control purposes), and that is when she found the Endometriosis. She had sworn if she found anything, she would remove it. When I had my post op appointment, I was told she was not skilled enough to remove it, but she could “fix” it with hormonal therapy. That, of course, was her second lie. I continued to go to doctor after doctor with at least an official diagnosis.

I am still here, still suffering, with nothing more than that diagnosis and hormone shots, pain pills, and bouts of excruciating pain. I am trying to advocate for the disease for awareness, better treatment, and empathy. I took my journal of documentation and wrote a book about the struggle. I have aptly titled it Endopocalypse. My hope is that it will help advocate for all of the women suffering with this disease, or at least help them not feel as alone as I did in my first year of suffering.