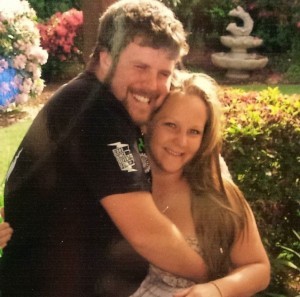 Six years ago my mommy, my ROCK, was diagnosed with pre-stage (nearly unheard of catching this cancer so soon) small cell lung cancer. We weren’t really surprised, you can’t be when you know it runs in the family and she had been a life long smoker. But we were still devastated, how could you not be. Two months into chemo, I shaved her head for her. She took it like a champ, I silently cried behind her with the buzzers covering my sniffles. I told her I would shave my head with her and she turned around and gave me the “look of death” and said, “No, you won’t. I want your promise here and now that you will never cut your hair.”
I promised her, and I have kept it. August 30, 2012, she passed away. She fought the good fight for five long years. It is incredible seeing that she only had a 23% survival rate from the Oncologist at the Cancer Treatment Center of America in Zion, Illinois.

One year and 17 days later, I went to urgent care on a Tuesday evening after work. I had been suffering lingering migraines, sometimes up to four days long before they left, back and shoulder pain, and it felt like my neck was swollen, kinda like a buck in rut (which is something I usually experience during menses). I was more worried about the back and shoulder pain as well as migraines, since I had a minor quad accident a few weeks before. I wondered if, minor or not, I had hurt something. The urgent care doctor instantly seized on the neck swelling and minor stiffness there, slapped a “C” collar on me, and took x-rays. She left me for about 20 minutes in the exam room biting my nails in a state of anxiety and near panic. When she finally came back in she told me that there was something she didn’t like in the x-ray of my spine and she wanted a CT done at the Hospital. She also said the ambulance was on the way so I needed to lay down on a back board and hold really still. As several big guys and a EMT filed into the room I started to lose it but I complied. They strapped me in and I went to the ER. The first time in an ambulance is NERVE WRACKING.

Once there they took a CT of my neck the ER doctor came back and said that the CT showed I had a vertebrae out of alignment which explained why the urgent care doctor was seeing nothing that a chiropractor couldn’t fix. But what she wanted to know was what was the bump on my neck? Bump?! What BUMP?!?! Sure enough I reached up and I had a plumb sized lump under my skin by my collar bone inside my neck. It was totally noticeable, and yet VERY NEW. I was a CNA for two years on a skilled unit just under the medical surgeon, took care of my mom while she had cancer, and I watched my body.

They said they could find out what it was, but it would require a contrast CT scan. I said lets do it. She left and ten minutes later came back with the trauma surgeon who said that the tissue in the “bump” looked cystic, NOT cancerous at all, and I shouldn’t worry. But if I was worried still in a few days, here is a referral to a ear, nose, and throat doctor.

A day and a half later, my little “plumb” tripled in size to a elongated tennis ball, was choking me, was ROCK hard, and painful. I called the referral doctor to make the appointment. It was a plastic surgeons office, who specialized in tendon reconstruction of the hand. They said they couldn’t get me in for about two weeks. Thanks for nothing. Back to the ER we went. We went to a different hospital ER this time. Once again, it was cystic tissue as far as the doctor was concerned, but if I wanted to “hot foot” it across town, then a ACTUAL ENT specialist could see me right now. Off my boyfriend and I went.

It turned out that they had failed to look at my insurance and she wasn’t a preferred provider, BUT her office assistant took the time (20 minutes) to find someone who was and could see me ASAP, because as I found out, Joyce (ENT) had gone over my file, saw the CT scan, and then came out and spoke with me and felt the “little alien” as we had taken to calling it. She did NOT agree that this was cystic, she said it was not just some cyst or calcium deposit, it was a gland or my lymph nodes and I needed to be seen– SOON! She saved my life, and I will forever appreciate her and the time she didn’t have to take to help me out.

One year and one month to the day of my mom’s death, I had to break the news to my family that I had been diagnosed with Hodgkin’s Lymphoma at 26 years old. A biopsy confirmed it and a PET scan showed us where all it was at. It was all over my neck, lungs, abdomen, and spleen (I think this is considered Stage 3 favorable. I will have ABVD chemo). I try not to get on the internet and look around, lots of BS to dig through that scares the crap out of you, and I don’t see my oncologist again until November 5. The Oncologist, who is a total Mr. Magoo and makes me laugh so often I could just squeeze him, took full control and started my path immediately. Everything from getting off birth control pills and getting a IUD, to having my eggs frozen to protect my future choice of having children, just in case. Which I want to thank the Live Strong Foundation for helping me with the costs of this process since insurance considers it experimental and unnecessary to my health.

As of today, October 23, 2013, I have not started chemo treatments, I have never even had stitches (though I did break my right wrist, both bones when I was nine years old). Suddenly, I have had two surgeries (biopsy and catheter port), contrast CT scans out the wazoo, PET scans, pulmonary scans, lung tests, been blood tested for everything under the sun, and now I start fertility shots Saturday, that I have to give myself everyday, twice a day, until November 6th when my egg retrieval is. Sometime after that I will start six months of chemo.

I am just so exhausted from the cancer, from life, from the steroids they put me on for the unexplained rashes, the emotional roller coaster, stress, and facing my own mortality so young. I turned 27 on October 16, what a birthday present. EXCEPT,  there is light and LIFE in this young woman yet. I have a tattoo on my right forearm, that I got in January as a memorial for my Mommy. It reads, “Love you Mom” (note the missing comma) in her beautiful, flowing, cursive handwriting. Though she had this thing about grammar, she always signed cards and notes to me this way. Now I can look down and it’s like we are saying I love you to each other. When I was diagnosed I didn’t want to be just another ribbon follower, not that it is a bad thing, but the lung cancer ribbon is white and doesn’t make for a real compelling color. So mommy always went with pink since October is breast cancer and my birthday month. She said it gave her hope as I was her BIGGEST cheerleader. So I found a different symbol for my fight: the Eternity Heart (Google image it) and got it tattooed on my arm just 12 days ago, around her hand writing. It reads, inside the infinity symbol, “Fuck Cancer.” And that is just how I feel. Sorry for cursing, but damn it if it doesn’t feel good to read it, say it, YELL IT!!! t(-.-t)

It will NOT get the best of me. I am NOT my cancer, I am NOT a statistic!!
I am a WOMAN! Who WILL Fight Like a Girl, low, dirty, cheap shots, and all.
Cancer, you better just give up now, because even the devil himself shakes a little when I wake up in the morning. <3 <3