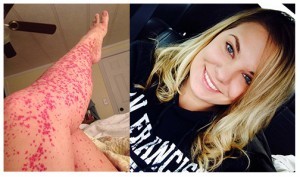 My story starts back in August of 2013, I was 24 years old at the time and was just beginning to kick off my career in portrait and event photography while waiting tables on the side. I was and still strive to be active and healthy, but was met with a very cruel surprise after a long, busy dinner shift that has since thrown quite a good sized wrench in the spokes. I was required to wear long, black pants and a long sleeved shirt to work so I did not notice until I returned home that I was covered from my elbows down in little red spots that looked to be a severe case of petechiae. This had my mom, who is a nurse, and I pretty freaked out. We had never seen anything like it and it was pretty random because they were not there just six hours earlier before I went to work.

I scheduled an appointment with my doctor for the next day, he took one look at it and diagnosed me with an allergic reaction which my mom and I knew was complete BS. I couldn’t feel the spots and they were not palpable (raised) or on the surface of my skin, they were under my skin. But I did as the doctor requested and took his prescribed allergy medication, which low and behold, did not do a thing. The spots began to get thicker and after about a week I was beginning to feel like I had a minor sunburn and noticed that the spots were growing to be palpable and were accompanied by joint pain in my hips, knees, and ankles. So after weeks of utter confusion, hoping it would just work itself out and go away, we were finally referred to a specialist who would not be able to see me for another two to three weeks.

During that period of time things got much worse, the rash got worse and so did the joint pain. Then one night out of the blue I was hit with some of the most excruciating abdominal pain I had ever felt in my life. It got to the point that my mom realized it was not just a stomach ache and off to the emergency room we went. We had come to find out that my intestines were so inflamed that I was literally full of shit. Because of this incident I was able to get in to see the specialist much sooner than scheduled, and thank goodness because he actually knew what was wrong with me. That day I was diagnosed with a rare form of Vasculitis in adults called HSP (Henoch Schonlein Purpura). This disease is normally only seen in young children ages four and younger, but there is a lucky 1-2% of adults who get it and I just so happened to be part of that percentage and the older you are when you retract it, the more susceptible you are to have it affect your kidneys which can send you in to immediate kidney failure. Luckily, it has not reached my kidneys and the rest of my innards are perfectly healthy… for now, but lets pray it doesn’t get that bad.

So I have been dealing with this crap for going on eight months. I have switched over to a 100% organic diet, I cant have alcohol, and I cant even go for a walk without my skin and legs flaring up like a damn firecracker. But even in the midst of dealing with all of that, I think the worst part about living with Vasculitis is not the pain, or the ugly unsightly rash, it’s the fact that almost NO ONE knows what it is and that there have not been enough cases of it in adults to know how to treat or prevent it. I have an appointment with a rheumatologist at Virginia Mason Hospital in Seattle coming up in the next couple of weeks and I am praying that he knows how to help me so I can kick the shit out of this thing.