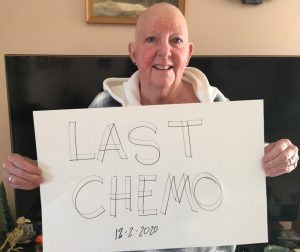 On June 29, 2020, I went in for my annual mammogram. I wasn’t thinking about it much, as my mind was consumed with getting ready for our annual 4th of July camping trip. However, during the exam the technician became a little concerned about what she was seeing. A doctor was called in to talk to me about some of their findings. I have dense breast tissue, and they wanted to do a biopsy just to be sure nothing was abnormal. He wanted to do it the next day.

Upon the procedure, they numbed the breast which hurt a bit. Then, I laid face down on a table that had a hole in it, which is where I placed my breast. The actual biopsy was not painful but seemed to take longer than I wanted it to. After that, I had an ultrasound on that area. I was able to view the test as she was performing it and noticed a huge mass in the armpit area that I did not think looked good, and the technician had that look when something seemed wrong. The next day, it was confirmed that it was breast cancer and that it was in my lymph nodes.

Everything moved very fast after that. There was urgency to get to the lymph nodes because my cancer was aggressive. The surgeon even stayed after hours to discuss the findings and what was going to happen next. She wanted to remove the breast and I begged her to take the other one, but two months prior to this I had an emergency pulmonary embolism and was two hours away from dying. I was in the hospital for 4 days during that time. She said my body was still recovering and it wasn’t strong enough to handle the trauma of the additional surgery. She could not tell how many lymph nodes were involved, so she took all of them. All 29 lymph nodes, and only 4 had cancer.

She wanted to do the surgery that week, like in two days, but I said no – we were going camping and it could wait a week. I am so happy I made that decision because I needed that time to get my head right since everything up to that point had moved so fast, and when I heard the word cancer my world stopped.

I can’t remember how long the surgery took, it didn’t seem to take too long. As I was waiting for the surgery to begin, a doctor came in with big needles and numbed the breast, that was painful and a nurse held my hand. The time came for me to go in – I wasn’t scared because I had been told that my surgeon was one of the best in town. I trusted her and the process. When I was in recovery, the first thing I asked the nurse was if the cancer was gone, and in a very quiet voice she told me yes. I didn’t feel sad or like I had just experienced a huge loss; I wanted to do whatever was needed to live. The best part was that once I was awake enough, I was allowed to go home. For real, I just had a body part removed and I got to go home. I was so happy with that because it was during COVID-19 and I would have been in the hospital alone and I really needed support and love at that time.

The most painful part about the whole process was the drain tube. It was sore and hurt whenever I moved. I had to measure and record the fluid coming out of me and when the level dropped to a certain amount I was allowed to have the tube removed. That particular tube was long and in very deep – I screamed when it was pulled out and maybe even cried a little. I wasn’t allowed to get my chest wet, so bathing was out of the sink with a washcloth. We had a pool and I could only go in up to my waist, or put my feet in.

Please, please get your mammograms! I had no symptoms, no lumps, no pain and no history of anyone in my family having cancer of any kind. Because of my age I can skip a year, I wish now that I had not done that so this might have been found earlier before it spread to the lymph nodes. and because of that I worry if it was caught in time.