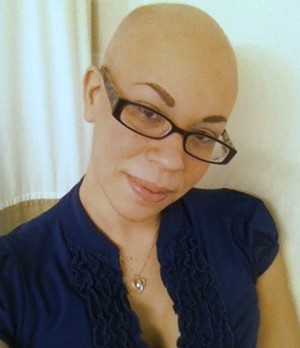 On June 14, 2011, I was diagnosed with breast cancer. It all started when I performed my monthly self-exam and felt something was not right. I made an appointment with my doctor and, after a few tests, I received a phone call telling me I had ductal carcinoma in situ, which is stage 0 cancer. I was told I would not need chemotherapy but surgery and radiation was in my future.

So many emotions and so many questions came up in my head. Why me? What did I do wrong? Am I going to die? How do I tell my family? I suddenly felt dirty, broken, tainted, knowing that I had cancer in my body. I felt betrayed by my own body. I cried for the next few days, barely ate, and hardly slept. It was hard breaking the news to the family because I didn’t want to feel like a burden or like the black cloud hanging over them.

Thankfully, I received overwhelming love and support on behalf of my co-workers, our family and friends. This would prove to be so important because after an MRI and a couple of biopsies, it was determined that I did not have ductal carcinoma in situ as it was first believed, but instead invasive carcinoma, meaning it had spread beyond the milk ducts into the surrounding breast tissue. Now chemotherapy would be added to the equation for sure.

The next step was surgery which involved removing the mass and having a sentinel lymph node biopsy. The results, good news! The cancer didn’t spread to the lymph nodes, but there was bad news. The margins from the lumpectomy tested positive for more cancer cells. Now what? The doctor recommended a mastectomy to be completely rid of the cancer. The news was devastating but I made the choice to have a bilateral mastectomy with immediate reconstruction.

Days before the surgery, I battled so many emotions and even contemplated giving up. The thought of losing my breasts ate at my brain but I realized that I was choosing to live by going through with it. Many were in shock over my choice to have a bilateral mastectomy but I wanted to be around for our children. My words were: ”Everyone deserves a lifetime” and I was choosing to live.

The days following the mastectomies were dark and very hard on me emotionally. I refused to let anyone stay with me in the hospital but allowed visitors. The days were bearable, the nights I cried a lot. I lost two of the things that made me feel like a woman, Damn you cancer! Three days later, I was released from the hospital and I had to decide how I was going to live my life going forward. I chose immediate reconstruction which involved having tissue expanders placed inside my chest wall. I would go on a weekly basis to my plastic surgeon for saline injections to stretch the skin and muscle, making a pocket where the future implant would live. Some weeks were ok, others were unbearably painful. How much torture can one body endure?

One month later and we’re starting an aggressive 16 weeks of chemotherapy; the first four cycles were horrible. Nausea, intense fatigue, weight loss, loss of appetite, dehydration – you name it, it was happening. I lost my hair the same day of my second treatment, another blow to my self esteem. I’ve lost my breasts and now my hair.

January 25th, 2012 was my last chemotherapy session that was a happy moment indeed. Now I will start an estrogen blocker within the next few weeks and plan my implant surgery, slowly on my road to recovery from this nightmare. I’m happy I fought to live…

Thank you for taking the time to read my story, the pink ribbon symbolizes the fight against breast cancer but the color pink means much to my family. It means hope, strength, courage, faith, and love. Pink symbolizes the journey that I’ve experienced, a test of my faith, and it has shown me how strong I really am. Pink will never be just another color to me. I chose to fight like a girl so that I would be able to see my kids grow up and grow old with my husband.