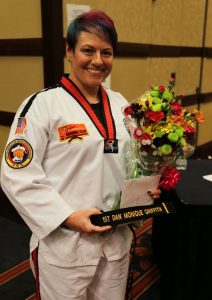 In 2010, at the age of 38, I was diagnosed with Stage 3 Inflammatory Breast Cancer (IBC); which included a 12 cm tumor that had gone through to my skin. I was told it would probably spread, and that I most likely had 2-5 years to live. However, as the mom to a sweet 5 year old little girl, and a wife to an incredible hubby, I was nowhere near ready to hear that. After the shock wore down a bit, I vowed to fight with everything I had in me. Intense chemo started immediately, followed by a double mastectomy, and then twice-daily radiation since IBC is the most aggressive form of breast cancer. After that, I went on a hormone blocker and had 6 years cancer free.

During those 6 years, I decided to live my best life and see what this body was capable of. I grabbed a few friends and took up triathlon training, which was entirely new to this hard-core couch potato. I managed to complete six triathlons, including one Olympic distance race. I was never fast, but I pushed myself and constantly improved. Before this, I had never even been able to run a mile, but I actually completed several 5k runs, a couple of 10ks, and even two half marathons! To really go outside of my comfort zone, some friends and I did a Tough Mudder up in Tahoe – a 12-mile mountain course with 20 obstacles and tons of mud.

I was learning I could accomplish anything I set my mind to; so, in 2013, my daughter and I signed up for Taekwondo together. It took everything my mind, body and soul had to get to the point three years later where I was ready to test for my black belt. Unbeknownst to me at the time, though, my cancer had come back and spread to my lungs. I just knew my chest hurt and it was hard to breathe, but didn’t know why. So, I took my black belt test, consisting of a 3-hour workout, a timed 2-mile run, and later board breaking and sparring. I passed! Come to find out, I did that with stage 4 cancer, and a collapsed lung full of fluid. But I did it!

From there, I started back on chemo for the next 3.5 years. I had countless procedures to drain my lungs, radiation to help shrink the cancer, and eventually had catheter tubes in each lung. The cancer was spreading throughout my lungs, and they told me to ‘prepare my family’. I was on oxygen full-time; I could hardly eat or walk to the bathroom and had to use a wheelchair if I went anywhere. The doctors started me on a different chemo, and by the grace of God, things started to turn around. Each CT scan started to look a little better than the last, and I realized I didn’t need the oxygen anymore.

By March of 2020, after several clean CTs and a PET scan, my oncologist declared me in remission, and I was able to stop the chemo! What a miracle it has been! In the last 4 months, I have been working on getting some strength back, and even got my own treadmill. I may not be signing up for a triathlon anytime soon, but I feel fantastic, and best of all I’m getting to see my daughter grow up. She is about to turn 16 and start her junior year in high school, and I have every hope that I’ll be around to see her graduate and become a strong, independent woman like her mama!