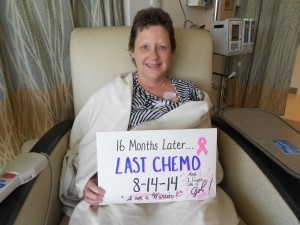 So after 16 months of 6 treatments of Taxotere & Carboplatin, 4 doses of Adriamycin, 33 radiation treatments and 17 Trastuzumab (Herceptin) treatments, I am now Cancer Free!

My story began late last winter 2013. I had been feeling extremely tired and weak. In April I discovered a large lump on my right breast. I thought it was just muscle because I had been doing Yoga for my low energy. I went to the doctors and had a biopsy done. My mammogram from September had been perfect. It came back a week later that I had breast cancer. This was on a Friday while I was at work. By Tuesday I had an appointment with a cancer center in the city. They were wonderful.

And so the journey began. For the next two weeks I had numerous tests done and was diagnosed with a very aggressive form of HER2+ Breast Cancer Stage 3B. The tumor was 5.8 x 5.7 cm and was growing rapidly.

I began chemo therapy every 3 weeks for an 18 week course of Trastuzumab (Herceptin), Taxotere & Carboplatin and was awfully sick. In September I had my right breast removed and sadly learned the chemo treatment did not touch the cancer at all and it had spread to my lymph nodes; 4 were cancerous. All my lymph nodes were removed as well.

I went for a second opinion, and they and my oncologist recommended another round of chemo. Adriamycin was the choice, and so began another 12 week round. Again I was very, very sick, even hospitalized, and lost my hair as well for the second time.

Shortly after this, I fell and broke my shoulder and arm. This delayed my radiation treatment which finally began in June.

It was grueling and hard, but I must say “I Fought Like A Girl!”