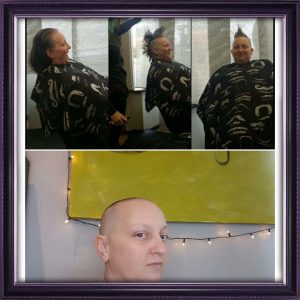 After at least 2 years of struggling to find a physician who would listen to me and not brush me off, 2 years of being told “oh you just have a UTI or bladder infection,” of having male doctors discount my words as inexperience of my own body, and even having one doctor actually ask me if I was sure I was urinating blood clots and say it could just be related to my cycle, I finally had a Physician Assistant listen to me and refer me to a urologist. Within the next two weeks, I had an office visit, a cystoscopy and received my diagnosis of bladder cancer.

I was both floored and relieved. Floored because I didn’t expect the C word. Relieved because now I knew what the problem was, and I could figure out how to proceed.

I received my diagnosis on August 12, 2016. I was given 2 options: chemo then surgery or surgery then chemo. There was only a 5% difference between the prognoses, so I went with my gut. After experiencing increasing pain and discomfort over the course of 2 years, I wanted as much of it out of me as quickly as possible.

On September 23rd, I had a radical cystectomy by daVinci. My bladder, uterus, ovaries, cervix and pelvic lymph nodes were all removed. Part of my small intestines were used to reroute my plumbing and make a stoma site on my stomach. I now have a urostomy for life. My tumor was a T4 and had grown through my bladder wall and started attaching to my cervix.

I was originally supposed to be in the hospital for a week and rehab for 2 weeks. I had complications. That combined 3 week stay turned into 2 months. Still pretty weak, I returned home November 15th, in time to enjoy my birthday and Thanksgiving.

The week after Thanksgiving, I had my first oncology office visit, got my port, shaved my head with the help of family and friends and started chemo. Chemo was brutal. I had one of the strongest cocktails they’re allowed to give with a dense schedule. I was supposed to have 6 treatments 2 weeks apart. I had 4 treatments 2 weeks apart. The fifth was 3 weeks later, and we cancelled the sixth because my body couldn’t take anymore.

A week after my last treatment, my blood levels decided to go for one last hurrah and plummeted, which, since I’d felt so crappy all along, I didn’t realize, and I ended up falling. When EMS got me to the ED, my hemoglobin was 5.7. It’s supposed to be 12 or higher. I was admitted for a transfusion and then sent back to rehab for 3 weeks to rebuild strength. I was discharged on Friday, March 24, 2017, and returned to work on Monday, March 27th, using a walker and without any hair.

By May 26th, I received the news that I was in remission. I’ve had ups and downs along the way since, and there are bits and pieces I’ve left out, but this is the major part of my story.