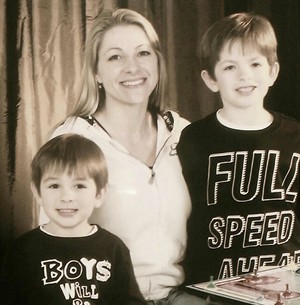 I was in my mid-twenties when I noticed a tiny lump in my right breast, but I dismissed it as that normal lumpy tissue that some young women have. A few years had passed and I had become pregnant, and I noticed the lump had become slightly bigger. It didn’t hurt so I didn’t think it was a problem, and I thought it had grown because of the pregnancy, but to clear any suspicions I made an appointment to have it checked out.

I initially went to a general surgeon who was very concerned and encouraged me to have a biopsy done. You would think I would have acted upon her advice, but I didn’t. I was young and dumb, I guess you could say. I didn’t think that at such a young age I could have breast cancer. Did I mention that my grandmother had passed away from breast cancer? A month or so had gone by when I received a call from my general surgeon and she asked if I ever had the biopsy done. I told her no and again she expressed her concern. I was really taken by the fact that she called me and cared enough to push me to get that biopsy. Little did I know that she would be the person I could say probably saved my life. I finally had the biopsy done and not too long after that I got the call. When the doctor on the other end of the phone asked me if I was sitting down I knew what she had to tell me wasn’t good. I had cancer. I was in shock and my husband, who was sitting next to me, started to cry. I couldn’t believe it. I was two and a half months pregnant and was just told I had cancer. What in the world did this mean? What was going to happen to my baby and to myself?

I went to see an oncologist right away to figure out what I had to do. As simply as I can explain it, she suggested I terminate the pregnancy, have a bilateral mastectomy , and do chemotherapy. I was in shock once again. It was more devastating to hear this rather than be told I had cancer. I left her office in tears. I was not prepared for the treatment plan she had suggested. I didn’t want to lose both breasts and I most certainly didn’t want to lose my baby. My husband and I didn’t see losing our baby as an option. Determined that there was a treatment plan out there that would allow us to keep our baby, my husband and I sought a second opinion. Again, we were told to terminate the pregnancy and to start an aggressive treatment. I could not express in words how I felt. It was like my world came crashing down all around me. I knew it was all to save my life but I couldn’t accept losing my baby. So my husband and I did the unthinkable, we went to get a third opinion. Rather than go to a private practice oncologist, we went to a cancer treatment center and met with a tumor board. We pretty much begged for a treatment plan that would allow us to keep our baby. After all was said and done, we were told that keeping our baby would absolutely be possible. Not only that, but I wouldn’t have to do the bilateral mastectomy or chemotherapy. I could have a lumpectomy performed followed by radiation. I could not believe what I was hearing! I was so happy, and grateful. My chances of survival with the other treatment plan were extremely high, and so were my chances with this treatment plan. I just could not believe the difference that third opinion made. I was shocked at how much different my visit to the cancer center was compared to my visits to the first two oncologists, but that’s another story.

I continued with my pregnancy under close supervision. I had the lumpectomy done during my third trimester. Everything went well with the surgery. A few months later I gave birth to a healthy baby boy. I started radiation soon after. I couldn’t breast feed but I was ok with that. I was just so grateful to have my baby. It was challenging to do radiation and take care of a newborn. My skin did burn from treatment which made it very difficult to hold my son, or to do anything for that matter. Again, I had no problem with it. I was happy. In addition to radiation I was taking an oral medication that acted like mild chemotherapy . I didn’t get sick from it or lose hair. I honestly didn’t feel any side effects.

After three years passed I became pregnant again. Although I was told to hold off for a while on having kids after my first was born, I continued with the second pregnancy. My chances of survival were still high, just a tad less than after the first pregnancy. I went on to having another healthy baby boy and I continue to be cancer free. I don’t encourage anyone to do what I did if ever anyone were in the same situations. What I would suggest is to get a couple, if not a few, opinions when it comes to cancer treatment. There are so many options out there so don’t limit yourself. Cancer treatment has come a long way, allowing every patient to have a more personalized treatment plan.

Thank you for hearing my story.