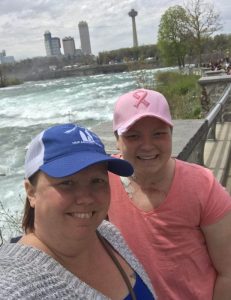 It all began late 2015, when I was sitting on my bed and I had an itch up under my right breast. I ended up feeling something that felt like a marble. I waited a few weeks until after the beginning of 2016 before I called my primary physician.

The next available appointment they had was the first of February. I went in for my appointment, everything went as it always had. She did the breast and pelvic exam; then as she said she was done, I said, “okay now that I’m sitting up, I need you to feel up under my right breast.” She did so and immediately decided to schedule me for a mammogram. You couldn’t feel it as I was lying down. You could only feel it when I was in an upright position.

A little over a week later, I went in for my mammogram. They had me sit in the quiet waiting area out of prying eyes and wait afterwards. It wasn’t the main waiting area, it was an area set up for mammogram patients only. The nurse came back after what seemed like forever and said the doctor wanted to do an ultrasound as well. So, off we went back to the ultrasound room. After that she told me to get dressed and wait in that waiting room again. After what seemed like about 20 minutes, she came back and got me and took me back to where the doctor who read the results was in her office. She showed me the mammogram and ultrasound results. She said she was going to get the information over to my doctor as soon as possible. She said she did see a mass and by all distinctions believed it could be cancerous.
Two days later, my doctor called and had scheduled a biopsy.

I’d have to say, that was the worst part of all of it. The breast biopsy went routinely, but once the doctor went to get tissue from my lymph nodes and in the process of numbing the area, I believe she hit a nerve several times, sending me in to full blown panic mode. My heart began to race so badly that the nurse who was there simply to comfort me, could feel my heart pounding through my chest as she sat next to me with her hand on my arm and shoulder. The doctor stopped for a couple minutes to allow my heart rate to slow, my blood pressure to lower and for me to begin breathing normally. Unfortunately, as she moved the biopsy needle, it all started back up again. She quickly finished with the biopsy and left the nurse with me in the room as I broke down sobbing. I was terrified. I seriously felt like I was about to die.

They said it would be a few days before the results were back.
The next afternoon as I was leaving work at 6 pm (what doctor stays until 6 pm in their office?)...my phone rang and on the other end of the line was my doctor. (What doctor makes her own calls?) She asked me to come down to her office. My heart sank. Doctors don’t normally call their patients themselves and surely don’t call their patients and ask them to come in an hour after they close the office for the day.

I called my mom and dad (even though I was 41…I still needed my mommy and daddy). They didn’t know exactly what was going on because I hadn’t told them. They hightailed it to my doctor’s office (normally a 40-minute drive, in under 30 minutes). I was there first because I was less than 10 minutes away from her office. She was waiting out in front of her office doors for me. I told her mom and dad would be there shortly. We sat in her office for a few minutes and just chatted like we were old friends. The whole time my insides were crying! My mom and dad got there, and we went back to her office. She was the same doctor who had given my grandma the news that she had breast cancer. So, she knew my grandma and grandpa. She got right to the point…“the biopsy came back positive for breast cancer”.

I blanked out and don’t remember much of the conversation after that. My mom and dad started asking all the questions, while I sat there just staring at the ground, wanting to break down sobbing, wanting to curl up in a ball and just cry.

We all left after chatting for about an hour, we all went our separate ways. My next hurdle was to call my grandpa and tell him I was going to have to battle the same thing that my grandma did twice. It took me a half hour to muster the courage to make that call.

He answered the phone and all I could say was “grandpa, I need you”.  His response  was, “what do we need to do? What do you need me to do?” He knew, he just knew. His oldest granddaughter was about to go down the road he watched his wife go down twice. He was by her side every single step of the way.

About three weeks later, I started the chemo. I had four rounds of chemo, a double mastectomy and then 3 more rounds of chemo. I chose the double mastectomy because the lump was actually large, 10 cm, the small marble I felt didn’t compare to the remaining lump that was more hidden. I also chose that because I wanted to lessen my chances of a recurrence since my grandma had breast cancer twice before losing the battle to ovarian cancer.

She fought the cancer battle three times in 10 years.
After the second round of chemo, I had 28 days of radiation.
At this point it was the first of December and my year had been a whirlwind. Most of my family had been by my side the whole time. My oncologist had said I was cancer free and at the end of January 2016, I had reconstruction. I was still getting Herceptin infusions every three weeks and continued to do so until May.

I had met a beautiful young gal during all this. Her name was Katie Jo. She had a lovely contagious smile. She had triple negative breast cancer and wasn’t even 30 years old. She was married and had two young boys. I can’t tell my story without sharing part of hers. We were each other’s rocks. We could talk about our pains, feelings, anything and not be judged or made to feel sorry…we understood each other. She lived in Buffalo, NY and I lived in Des Moines, IA. We quickly became ‘Pink Sisters’. Her cancer was in her left breast, mine in my right. She was triple negative; I was triple positive. We were in essence opposites, but the same in so many ways. We both had been diagnosed within a couple months of each other. We both had surgeries around the same time as one another. We were both declared cancer free within weeks of one another. I made the decision I was going to take a long weekend and go meet her and her family. I did so after my reconstruction. We connected instantly! She smiled all the time. She was always so positive and was a beautiful ray of sunshine!

Unfortunately, her cancer returned not even a year later, and it was back with a vengeance. She suffered so much. She was in tremendous pain and discomfort all the time, but she still smiled. She passed away almost two years ago. I was able to make it out to see her one more time the spring before she passed. She left behind two beautiful boys. Her mother was her rock. She helped her every day. She quit her job to help her and to take care of her boys while her husband worked to pay the bills.

I still keep in touch with her mom, she is like a second mother to me.
Cancer touched me and may have destroyed a lot of me mentally, but cancer brought Katie Jo into my life and I’m forever grateful for that.
At the end of this month, I will be four years cancer free. My surgeon told me after my mastectomy that I was cancer free as they got it all. The additional chemo and radiation were to get the microscopic bits that could still be left behind, but were too small to see or physically remove.