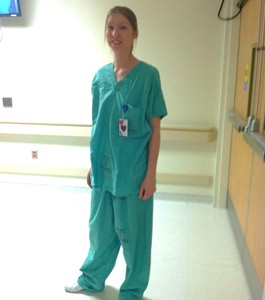 Since I got my first period at age 13, I knew something was wrong. The pain during my period was excruciating, and no amount of ibuprofen would touch that pain. I was one of those people laying in the nurse’s office at school with a heating pad attached to my abdomen. As I got older, my mother took me to numerous doctors to try to diagnose the pain. I went to all types of doctors, had endoscopies, colonoscopies, and ct scans galore. By the time I turned 18, a doctor told my mother that my issues were purely psychological. That’s when I stopped going to the doctor and tried to hide the pain.

Fast forward to age 23. At this point, I developed a constant ache on the left side of my abdomen. I eventually went to the gyno who sent me for an ultrasound. I was told I had a cyst on my left ovary. I was referred to a reproductive endocrinoligist who I didn’t like initially. But he was considered the best in my area, so I consented to the surgery.

My first surgery was in May 2005. When I woke up, my mother was in the chair next to me crying and saying ”I didn’t believe you”. The doctor came in and explained to me that I had severe endometriosis. I had the cyst removed and some of the endo treated during that surgery, but then I went back in and had my appendix removed about 4 weeks later, as it was attached to my back by endo scar tissue.

Over the next 4 years, I had 5 more surgeries. The last one was in August 2009, when they removed my left ovary. This is when I decided to return to school to become a nurse. The nurses that cared for me inspired me, and I wanted to help and give back in some way.

I graduated with my RN in May 2012. I now work with special needs children. I absolutely love it, and I think of these kids as my surrogates, as I doubt I will have any of my own. I have not had health insurance since 2010, so I don’t know if my disease has gotten worse, since I would need a lap to be sure. I pray that I find a full time position with health insurance soon, for my own peace of mind.

I often think the emotional pain is almost as bad, if not worse, than the physical pain. I spent a lot of years being angry at the world and how unfair it was. It also makes me sad that my mother has so much guilt. None of this is her fault, and she did her best to find out what was wrong. I tell her I love her daily, just to make sure that she knows that, and I hope someday she can release herself from this guilt. She’s a strong, amazing woman herself.