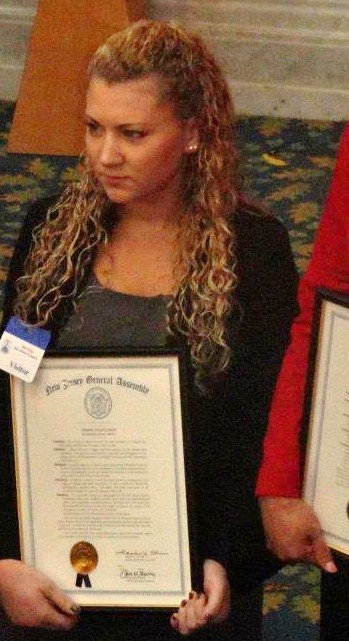 My name is Allyson.  I am 22 years old from Northern NJ. I am a public speaker on anti-bullying and sexting awareness.

When I was a sophomore in high school, I was a straight A, fully involved, popular, church-going girl. I had strict parents and I was not allowed to date until high school. I started dating a boy on and off my freshman year and when I was 16 and a sophomore my boyfriend broke up with me. Being a naive 16 year old and, thinking that we were in love and that we were going to get married, I was crushed.

About two weeks later, my ex-boyfriend told me he would get back together with me if I sent him a naked picture. Impulsively and without thinking, myself and my two best friends went into my bathroom and I took off my shirt. They put their faces next to my chest, took the picture, and pressed send. He never answered that picture message. Overnight he had forwarded the picture to everyone in his contact list – to parents, friends, classmates, and even strangers.

I was mortified and ashamed. Immediately the taunting began. I was called ‘ho, whore, and slut’ in the hallways and someone even got on a table in the cafeteria and screamed ‘Ally is a slut’. People posted my picture on MySpace and I received death threats from girls whose boyfriends had seen my picture. My house was vandalized, I had paint cans put in my pool and a tire rolled into my front glass door. I went to my principal for help but was turned away and told to come back if “it got physical”. The boys in my grade told me I would never get another boyfriend because everyone had seen everything already. My friends told me that their parents thought I was ”disgusting” and they couldn’t hang out with me. I had to beg a friend to walk with me in the hallways, to my locker, and even to the bathroom as protection because I was so deathly afraid of what people would do to me. My little brother’s “friends” sent him the picture, asked him what he thought,and when he said ”oh, hot” they said “you’re messed up, that’s your sister”.

It wasn’t just kids that were making my life a living hell. I had teachers who said I couldn’t use the hall pass ‘unless I promised not to take anymore pictures’ in front of the class. The school principal told me he couldn’t help with the bullying but to come back to him ‘if it got physical’. My best friend’s father even texted me and said that he liked my picture and invited me over for chocolates and wine. I had bosses who told me they had heard about my picture and they were going to find it, rate it, and let me know what they thought. My grades plummeted, I had very few friends, and I became so introverted that my parents worried I was on drugs. Eventually it got so bad that I attempted suicide by taking a bottle of pills. After therapy, family support, and finally forgiving myself and realizing I was never at fault, I started to heal.

After graduation I figured the abuse would stop. But I’ve had people make hate pages against me, call me a whore in public at bars, subsequently leaving me no choice but to live a very guarded life. I have also begun speaking out and going to schools to speak about bullying and sexting. I have met with many young girls in NJ and even as far as Canada who have dealt with sexting and wanted to talk about it. Some as young as 12.

I have worked with Assembly woman Pamela Lampitt on trying to change the NJ Sexting Laws. Before this year (and still the case in many states), anyone under the age of 18 caught sexting can be charged with distribution of child pornography and have to register as a sex offender until they are 45. They have to attend mandatory classes with child rapists and molesters, can’t live within a school zone, and can’t move out of state. Believe it or not, the girl (or boy) who first takes the nude picture can be charged with more than the person who forwards it; making of child pornography and distribution, both of which may cause them to have to serve jail time and register as a sex offender.

Luckily, Pamela Lampitt saw my story and decided that we needed new laws. Last year, a new sexting law was signed into effect after a unanimous vote by the Senate, by Governor Christie that mandated first time offenders to get therapy rather than register. Because of my work with Pamela Lampitt, I was honored at the State House in 2012 as a ”Rising Young Woman of Change” for my bullying and sexting work. I have also been on MTV: Sexting in America, MTV’s Disconnected: The After Show, MTV’s Bullied Documentary, The View, Good Morning America, CNN.com , Dr. Drew, thestar.com, The NJ Herald, and Life&Style Magazine. I was also accepted onto, and am a huge part of, MTV’s A Thin Line campaign’s Street Team.

Kids need to know that it does get better.